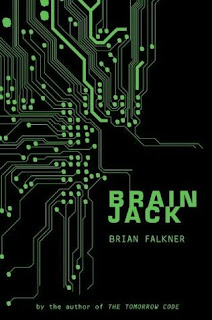 
In a post-post-9/11 America, the most deadly threat comes from the Internet, and Sam and a small cadre of young hackers are the sole line of defense...

Sam is a hacker, a freak, a natural.  He can code on the fly and read viruses and cut them off before they can do any damage. And like any teen boy he uses these powers for good, which is to say he and his buddy Fargas dip into a large multinational company so they can dip into their bank accounts and order up some sweet new laptops and neural headsets that allow you to jack into the Internet world through thought waves.

Seeing as this is the near dystopic future, life isn't all roses.  Terrorists have taken out Las Vegas with a nuclear weapon and Homeland Security is now on par with the CIA in terms of proactively making sure the US remains protected.  The problem is that this includes attacks via the Internet, and Sam's little cyber crime has alerted the big boys.  He thinks he's free and clear until he attends a super secret hacker's convention that in turn becomes an online meet-up on the White House servers which, in fact, is really a sting operation to catch Sam.  Once caught, it takes him only a few short weeks to figure out how to get out of the minimum security facility... and right into the arms of Homeland Security, who set the entire thing up as a sort of protracted pre-employment test.  It was the only way to find the best of the best, and Sam passed with flying colors.  It also means he either works for the government, or he returns to jail.

Once he's working for Homeland Security Sam's job is to serve as wingman for Dodge, a punk he'd encountered back at the hacker convention.  Their job is to monitor Internet traffic and sniff out potential threats.  One attack appears to destroy them one moment, and then in the next be their savior. This phantom of the Internet also removes spammers and online gaming, things many are happy to see gone.  But as they try to understand what is going on Sam senses something darker is in the works, something dangerous that involves the neuro headsets that get people addicted to being so jacked into the Internet that, like his fried Fargas, they cease to do anything but stay plugged in until they die.

And once Sam figures that out, all hell breaks loose.  Like internal civil war and mass hypnosis hell.  Families torn apart, one branch of the military against the other type of hell.  Can Sam and his friends save the country before it destroys itself?  And if he can, will Sam be destroyed in the process?

This story has fingerprints of The Matrix all over it, what with an entire world full of people jacked into a world where they can just "know" things due to the collective hive mind.  But the battle scenes with virus attacks read like air-to-air fighter jet combat, written with assured technical jargon and a very real sense that this sort of thing could be happening in our future.  Faulkner's plotting and pacing is perfect, the jogs between real world action and battle online taut, and there isn't a single page of fat or filler to be found.  Books that push beyond 200 pages have to prove themselves to me, but half way through these 350 pages I knew I was in good hands and eagerly wanted to know how Falkner was going to make this work.

It has been a long time since I picked up a book that I wanted to race to the end of, and if this isn't already optioned for a major motion picture then someone is asleep at the wheel.  That said, I hope someone in Hollywood is asleep at the wheel, because this book could so easily be ruined in the wrong hands.

As for that phantom that takes over the Internet and sets the country against itself, I believe Pogo said it best: We have met the enemy and he is us.
Posted by david elzey at 1:35 PM 6 comments: 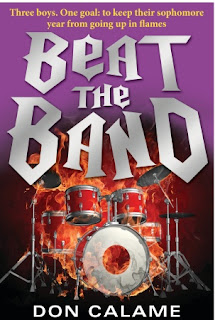 (This review is being cross-posted at Guys Lit Wire today, for those of you keeping score at home.)

There is no phrase that jolts my skeptical meter into the red faster than "laugh-out-loud funny." When a movie is described this way its almost guaranteed not to make me laugh, but it's worse when this line is used in books because it's so rare that I laugh out loud even when something is truly funny.  For something to be funny enough that I laugh out loud while reading it I have to be caught off guard, I have to not see the joke coming.

I actually found myself laughing out loud more than a couple times while reading Beat the Band, Don Calame's follow-up to last year's Swim the Fly.

As part of a semester-long project in Health class, Cooper is paired up with the notorious "Hot Dog" Helen which instantly lowers his cool cred at school. Worse, their topic is on contraceptives and STDs.  Coop's brilliant solution: enter the school's Battle of the Bands competition so he can rock his way back to cool and bury his lowered social standing. Problem: he hasn't told his buddies he's entered them into the competition, never mind that none of them can play an instrument.

I wandered into Beat the Band cautiously; I didn't really like Swim the Fly, and I was worried when the boys started talking about their goal of "rounding the bases" with a girl. I just didn't want to read a story about boys on an empty conquest, and I really didn't want a story that was a typical "girls are people with feelings, too" moral clinging to the bottom of it's shoes. Fairly quickly though the story shifts to the semester project, and the pairings among students, and this urgency Cooper has to get Helen and her undeserved reputation from sticking to him, and things looked up.

True to "boy" thinking, Cooper's idea is pure inanity, and there's no way its going to go the way he imagines.  These self-made scenarios can be tricky territory for an author is they don't really grok the delusions boys will invent to follow-through on their schemes. And for the humor to work there has to be something more than uncomfortable scenarios, there has to be a certain ratcheting-up of the situations, things have to go one (logical, yet unexpected) step beyond.

The moment I gave in and went along for the rest of the ride comes in a scene involving Cooper, his dad, a pair of beer bottles, and some condoms.  As if scenes between fathers and sons cannot already be awkward without condoms this one soldiers on for a few uncomfortable pages before a left-field interruption that I probably should have seen coming, but didn't, and so I proceeded to laugh.  Out loud. And long enough that I had to take a moment before continuing forward.

Calame gets it.  He knows that boys will get themselves worked up over stupid things, will invent elaborate solutions to problems they invented, and will, in due course, come to see what's below the surface in their social worlds. They'll enter Battle of the Band contests and recruit the class pariah as their singer and it won't even matter whether they've won or not in the end.  Screenwriter Calame knows how to end a teen comedy on a happy note and, as cheesy as that can be, somehow it seems alright after everything else that's happened.

Oh, and for those wondering, the title of this post is the name of Cooper's band.  Despite of the fact it would be deceptive, I almost wish that were the title of the book.
Posted by david elzey at 4:30 AM No comments: