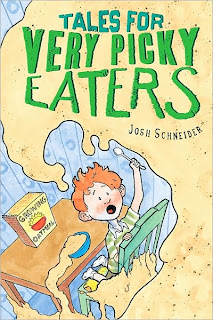 Five short tales for beginning readers utilizing reverse psychology. This might backfire for some kids. Like me.

Know a picky eater? Sure you do. And when it comes to getting them to eat the things we want them to sometimes a little creativity is called for. When James decides that broccoli is disgusting (without even trying it?) he asks for something else. His father offers him pre-chewed gum, dirt, and a sweaty sock. James decides that the broccoli doesn't sound so bad.

I'm not doing the book justice here. It's really very cute and, for a beginning reader, a good mixture of readability mixed with some challenging vocabulary, all in good fun.

There's a troll in the basement whose feelings would be hurt if James doesn't eat the mushroom lasagna. There's a list of the exaggerated effects -- rubbery bones from lack of calcium -- from not drinking milk. There's the ever-growing oatmeal that must be consumed to keep it at bay, else it will take over the house.  Finally come the eggs, the slimy, runny eggs. James guesses a bunch of crazy reasons why he needs to eat them but dad simply suggests he should try them because he might like them. He does.

And they were still hot.

So two thoughts about Tales For Very Picky Eaters, and they really don't have any effect on what I think. Mostly.

First, I was that kid who would try reverse psychology on adults as a kid. I was once separated from a friend for talking and given my own desk as punishment. I loved that! I made my punishment look like so much fun that other kids began trying to get in trouble so they could get their own desks. Eventually our teacher, Mrs. Bridges, had to create a new row for us misfits.

Second, and this might be a little more germane to the book, I was under the impression that we were moving away from trying to force kids to eat foods? Obviously I'm not saying (and no one else is) that kids should have soda and cake all the time but that their bodies will decide what they need and will come around to eating better in time provided the options were available. Kid doesn't like broccoli, fine, find out what vegetable they do like and give it to them all the time. Then when they ask for something else you can introduce that and build a repertory menu.

Do I think kids will enjoy reading this collection of humorous tales surrounding one of the Great Child-Adult Divides? Naturally they will, and most will probably be able to substitute a food and their own reasons for why they need to eat them. But there is the potential for backlash, especially with any parent who has used similar tactics, for a reader to suddenly realize that the stories they've been told are just that, stories, and the next time they are fed okra or lima beans or something else they have problems with they may just entrench themselves deeper.

Posted by david elzey at 8:22 PM No comments: 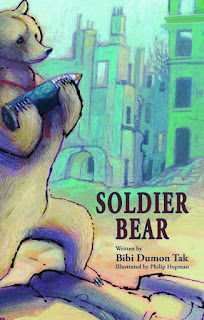 A cgarette-eating, beer-drinking, ammunition-carrying bear? Only warfare could create a story so improbable.

During World War II as Russia and Germany fight to claim Poland for their own the citizens caught in the middle are taken as prisoners in their own country, forced to flee to neighboring Iran. Among these escaped expatriates are Stanislav and Peter, a pair of inseparable friends who agree to join the British in the fight to help reclaim their homeland. One day while stopped along the road they spy a starving young boy with nothing to trade the soldiers but a small sack containing a bear cub. A cute little bear cub, who so totally entrances Peter that he trades a pocket knife, some cash, and tin of meat for it. None of the soldiers of the 2nd Polish Corps would imagine that this cute little pet would become not just a mascot but a source of comfort and a valuable comrade in the fight.

Once weened from milk the bear they named Voytek, "smiling warrior" in Polish, quickly adapts to his surroundings and behave much like a small child in the camp. Voytek prefers to sleep with Peter instead of his little makeshift bed, he bothers the cook for scraps, and learns how to give himself showers in the heat of the Palestinian desert where they are based before moving closer to the front. When scolded or scared Voytek covers his eyes with his paws and rocks back and forth, and when the soldiers become melancholy he knows to stand on his hind legs and place a reassuring arm on a man's shoulders. Raised around men Voytek learns how to behave as a man, as much as a bear can without betraying his nature. Granted, the soldiers introduce the bear to beer, which he loves and can be bribed with, and he mimics the soldiers smoking by stealing their lit cigarettes and eating them, but he also pitches in and carries ammunition when its time to work, earning Voytek an official designation as a Private in the 2nd Polish Corps.

There is something decidedly old school about Soldier Bear, an innocent absurdity that feeds into the wartime images we have of people doing and performing extraordinary tasks in the face of adversity. The connection with nature, a bear in this case, in the face of something as unnatural as life during wartime keeps the men of the 2nd Polish Corps grounded. All around them humanity is focused on so much destruction and yet here are soldiers chasing a bear, two dogs, and a monkey that they have also adopted around the camp as they wreak havoc. And when a winter snow quiets the war it is the animals who remind the soldiers about the joys of life by frolicking and starting a snowball fight that involves the entire camp. Ironic, that the link these men have to their humanity comes from the antics of a bear who was raised by soldiers in adversity.

Written in a clean style with a deceptive simplicity, Soldier Bear has the feel of a high-interest title aimed at reluctant readers without talking down to any. As a collection of vignettes, we follow Voytek's story with the 2nd Polish Corps for the five years until the moment after the war when his minders must return home and leave their friend and comrade behind. Though the parting is bittersweet, we learn in the Afterword that Voytek lived happily in the Edinburgh Zoo for another 15 years, which isn't bad for a bear who served during the war, drank beer, and was fond of eating lit cigarettes.

In thinking about it after the fact, the story is remarkable, but completely sidesteps the moral implications of these soldiers deciding to take care of a bear cub over the boy who owned him. A bear cub in the wild without its mother probably wouldn't have survived – indeed, I suspect the only reason the boy has the cub in the first place is because something happened to the bear's mother – but what about the boy, and what of his mother? Why not take the boy as a mascot, feed him and make him an honorary soldier? Is it not entirely possible that Peter and his friends saved the bear at the expense of the boy's own life?

Nonetheless, Soldier Bear was this year's winner of the Mildred L. Batchelder Award for “the most outstanding children’s book originally published in a language other than English in a country other than the United States, and subsequently translated into English for publication in the United States.” A worthy winner, to be sure, but there is nothing "foreign" about the reading experience.

[This review is also cross-posted over at Guys Lit Wire today, your home for books of interest to guys, by some of the best bloggers in the business.]
Posted by david elzey at 9:48 AM 2 comments: