For You and No One Else 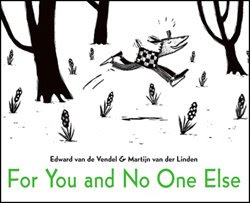 And here we have an example.

Buck the deer (or perhaps a reindeer) is out terrorizing birds in a forest one day when he stumbles on a seven leaf clover. Immediately he shares his new-found marvel with his friend Sparkleheart. Sparkle is impressed, so much so that he leads Buck to a field full of seven leaf clovers. Then, taking a cue from his friend, Sparkle goes around presenting every doe he can find with a special clover, for them and no one else. Depressed that his special gift for his friend was not special, and that his gift of friendship was used as a ploy to gain the affection of others, Buck trundles off and collapses in a fit of depression. That is when he sees, right in front of him, a true marvel: a clover with twelve leaves. This inspires Buck to give Sparkle the clover as a gift, shouting "YES! YES! YES! FOR YOU AND NO ONE ELSE!"

Okay, so maybe when I'm lukewarm to a book I can be less than charitable, but the plot summary isn't really that off the mark. Even accounting for differences in cultures and nuances in translation this is the story conveyed in the illustrations. This leaves me with the ultimate take-away question: what is the real story here? Is it that your friends will betray your affections callously, but you should continue to love them nonetheless? The jacket flap is a little more kind:

What do you do when you find a seven-leaf clover? Well, you give it to your best friend, of course.

Sometimes, though, best friends forget to be thoughtful in return.

Is that really it? Is it really a case of Sparkelheart being forgetful, or are we really dealing with a relationship between a giving and a taking personality? Sparkle doesn't merely give away Buck's gift, he uses Buck's action as a basis for going around trying to dupe all the females of the woods. Sparkle is an opportunist, a player, a user, and though it is admirable that Buck is going to stick with his friend there isn't any sense that Buck has changed at all in the end.

This is The Giving Tree problem in a sense, yes? Buck is like the tree in that it give unconditionally and Sparkleheart (asinine name, I must finally say) is the boy who takes and takes and gives nothing in return.

The art... in this small format picture book we have some very simple black and white scratchboard-type illustrations that are both playful and odd. The deer seem to have human legs in pants, with bodies of fabric that indicate gender (boys are square and girls are dress-shaped). It's the angularity of the images that make this feel less "American kid friendly" to me - it just doesn't have the requisite "cute" that the market tends to demand. Mind you, this isn't necessarily a bad thing to me, but it does give the book a bit of it's distance; it trades away its warmth for its uniqueness.

Technically, it's not a bad book, it just doesn't appeal. And I doubt it will be remembered - much less treasured - after its initial reading.
Posted by david elzey at 4:18 PM No comments: 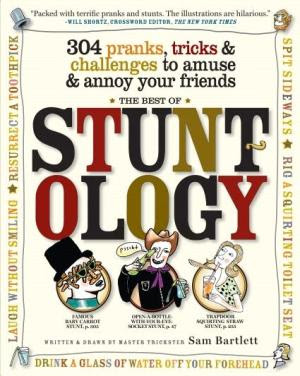 While I recognize that April is National Poetry Month it also happens to be the month that begins with one of my favorite non-holiday holidays: April Fool's Day. Is there anything more delicious than planning and pulling off that perfect prank, that preposterous practical joke? It seems such a shame that there's only one day a year dedicated to (mostly) good-natured frivolity; after all, they repackage Halloween candy as Christmas candy, and as Easter candy, and even in "fall colors."

But I think the problem is that it can be difficult to come up with the perfect stunt to pull off in a given situation. Putting a vacuum cleaner under someone's bed and waking them up with it instead of an alarm clock (as I did this year) doesn't work at a party, and similarly you can't pin a glass of water to the ceiling with your elderly aunt the way you could with younger sibling. Wouldn't it be great if someone could collect hundreds of these sorts of things, illustrate them in an amusing cartoon format, and present them in one volume with an index so you could look up the exact stunt you are looking for when you need it?

Ta da! I present you with Sam Bartlett's collection, The Best of Stuntology. Like the subtitle says, 304 pranks, tricks and challenges to amuse and annoy your friends.

I think the word "friends" is key here because you really ought to know who your audience is before performing some of these nifty little numbers. Some people have a lower tolerance for the absurd, where others just don't appreciate humor at their expense. It's too bad, because I do think at times like the world has lost it's sense of humor, and if only people could laugh (and laugh at themselves) more then maybe things would be alright. Then again, I'm not so sure how I'd feel if someone convinced me to try and catch a quarter in a funnel tucked into my waistband so they could pour a drink down my pants when I wasn't looking. I'd like to think I would laugh if someone could convince me to draw a moose with my eyes closed and tricked me into sticking my finger into peanut butter when I got to the "tail."

But Stuntology is more than pranks, as its name implies, and there are plenty of stunts that don't embarrass or otherwise deliberately set out to cause grief or hard feelings. Many, in fact, are participatory fun. One can, for example, engage in a conversation where each side only gets to say two words per sentence. Good fun. Not easy. Takes practice. Or you could dealing with some other annoying aspects of life via stunts. Say you've got a telemarketer on the phone and you can get past your immediate response to just hang up. Why not tuck your tongue between your teeth and lower lip and attempt to have a conversation until the person who called gives up in frustration? 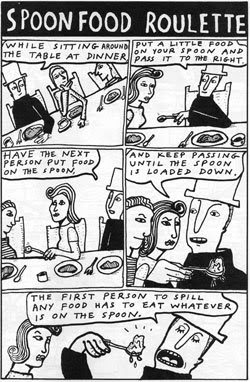 One of the great things about this collection is the portability of the stunts. Of the stunts that require props, few involve items not commonly found around the house. It is entirely possible to keep a mental storeroom of a dozen or so stunts that you can perform at parties or while visiting other people's houses. No need to buy fancy gewgaws at the joke or hobby shop (or online), simply show up and become the life of the party!

The pranks are single-page mini comics and Bartlett's illustration style has a playful naive quality, filled with rubbery pranksters and patsies who convey the full range of emotions. And without being explicit, one can gather from the response of the cartoon victims what a prankster or stuntologist can expect - no claims of "but I didn't realize you'd get upset" will be accepted.
Posted by david elzey at 5:31 AM 3 comments: