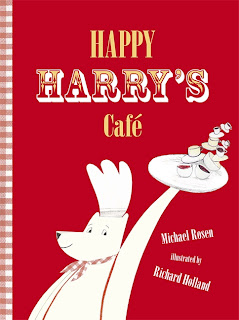 Harry makes great soup, or so we are told.

Once Matt has a spoon and tries the soup.
He is so moved he sings a song about the soup that sums up the story.
And everyone joined in and they were all happy.

In the world of children, this story makes sense.
Or rather, it makes up a certain non-sense that is a part of the way kids make up stories.

But it is not a real story.

It is like soup without a spoon.
There is nothing to taste,
and worse,
it is like everyone around you telling you how good the soup is.
But unless you can taste it it isn't very good soup.

Happy Harry's Cafe is told in a very simple way.
Even the youngest lap-sitters will be entertained.
They can watch the animals in Harry's cafe laughing and having a good time,
and then they can retell the story themselves
because it requires very little of them to remember.

On the book flap we are told that Michael Rosen is an award winning author.
And illustrator Richard Holland has illustrated many books
including books that inspired him to develop the collage style he used here,
a mixture of simple cut shapes and suggestive sketching.

They both live in England.

There is nothing bad to be said about them here
except that this particular soup they created
like it's sparse storytelling and muted palate
is pretty bland.
Posted by david elzey at 4:20 PM No comments: 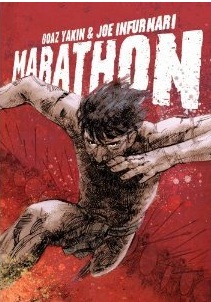 Some Greek guy runs from one place to another. And for this a race is named after him.

Have you ever seen a movie storyboard? At its most basic, it's a collection of images with key dialog or actions described beneath the sketches to help communicate what the final film sequence should look like. It is a way for the director to communicate to the cinematographer how to frame a shot, for an editor to get a feel for the tempo of a scene, for a producer to understand what exactly they're paying for. If it were good enough to stand on its own it wouldn't need to cost millions of dollars and countless resources to make, you could simply publish the results and call it a day.

Marathon, written by filmmaker Boaz Yakin (The Punisher, The Rookie, Remember the Titans) and illustrated by Joe Infurnari, reads like a storyboard, one with only the barest of dialog attached and very little story development. You get the jist of scenes, or emotions, of impulses and motivations, and some very direct and unsubtle dialog to help you along, but a large portion of this book is action scenes. Sketchy, difficult-to-make-out action scenes, scenes so hard to follow sometimes you wish they had decided to give every character a different neon color so you could follow what was going on. Because at the center of this book what is going on is a story not often told.

The Olympic sport of marathon was the result of a the Greek legend of Pheidippidies, the messenger sent from the battle at Marathon (a place) to Athens to announce the Persians had been defeated. He made this run after having fought in the Battle of Marathon itself and was so exhausted that after giving his message he died. Buried in the myth is the idea that the god Pan aided the Athenians, and some misguided military decisions based on the favorable placement of the moon. Toss in a little backstory about Pheidippidy-do's being a slave whose family was first spared then killed when he was a boy, and his wife making an offering to the god Pan, and now we've got ourselves a movie.

But not a readable graphic novel.

I get how this could make a compelling action film, and there are hints of that buried in Marathon, but the owing to Infurnari's loose, sketchy nature of the art and Yakin's seemingly tacked on human interest elements, the book simply falls flat.

This was a finalist for the Cybils Award and, quite frankly, I'm curious to know how this got past the first round of judging.
Posted by david elzey at 4:20 PM No comments: