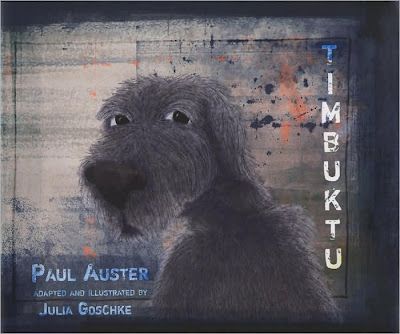 by Paul Auster
adapted and illustrated by
Julia Goschke
Penguin 2008

Wow. It isn't often you come across a miscalculation this severe.

First, I love Paul Auster's writing. I'm surprised to encounter people who don't know anything he's done. He writes for adults, so it isn't like I'm talking about some obscure children's author when I mention him to people.

But Auster didn't write this book. This is a picture book adaptation of his novel of the same name that tells Timbuktu's story from his own unique point of view. That is to say, Timbuktu is a dog, and his story is a meditation on what it means to be a modern dog in the city.

Here's the question I have: who thought this would make a good picture book for children. This came out under Penguin's Young Reader's Group imprint, so clearly they view this as a picture book. But what is the audience for a dog's existential meditation on life and, ultimately, death. Not just any death, the death of a dog longing to reunite with his old master, a homeless man. A dog death by playing a game with traffic. Unless I missed something, this is dog death by suicide.

I'll grant, there is a fairly strong history of books for children dealing with dogs that die, so much so that it's become a sort of joke. But a picture book? And I know there are books for younger readers aimed at helping them cope with the loss of a pet or other loved one. But a picture book where the dog chooses to play in traffic? Under other circumstances I also might have questioned the idea of a picture book that featured a dog getting neutered, but here that seems like a minor detail.

Okay, let's drop the ending for a moment and look at this as a story. We open with Timbuktu, called Mr. Bones here, observing that the homeless man who is his owner isn't long for the world. With a look his owner sends him packing, knowing he'll do better on his own, on the streets, than in the clutches of the authorities. So the story starts with a hint of death on the streets, just as it ends.

Next Mr. Timbuktu Bones goes in search of a new owner. I think. See, the text isn't really clear in that sense. It doesn't really have the kind of a story you follow so much as you kinda guess at it. This aimlessness works a whole lot better in novels than it does in picture books, let me tell you. So after a dashed hope with a few owners he somehow finds himself a new home with a family and some sort of provisional arrangement. I don't know, this is equally unclear. Next, the aforementioned neutering and some sort of rural retreat that may be a home for rescued dogs, a kennel for the terminally ill, or some sort of dog heaven. See, it's just not easy to grasp, and I'm a reasonably intelligent adult. Imagine trying to do all this with a lap sitter or a new reader.

Take that back, you can't do this with a new reader because the vocabulary is beyond them. Even as a read-aloud you'd have to spend fifteen minutes per page explaining the text, and then the images, and then the stream of questions that would result. But why is he now with that man on the subway? What is the doctor doing to him and why is he licking his private parts? Isn't it wrong for a dog to play around cars like that?

Poetry Friday: The Piano Has Been Drinking

What most of these folks have in common is that they're all pretty good with words and images. It's something I hope to have in common with them as well one day, besides sharing a birthday. Which is today. 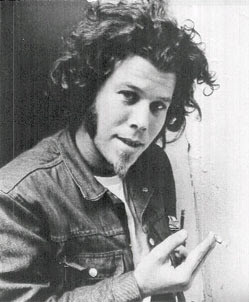 But for my birthday I wanted to share the wordsmithery of another Sagittarius, a Mr. Thomas Alan Waits, whose birthday is actually on the 7th. That's okay, we'll make him an honorary fifth-of, if he'll have us.

I like this because as each item and person is mentioned it's as if they have been brought to life in some surreal claymation nightmare of after-hours broke-down seedy nightclub reverie.


the piano has been drinking (not me)

Poetry Friday is over at Mommy's Favorite Children's Books this week.
Posted by david elzey at 3:58 AM 14 comments: 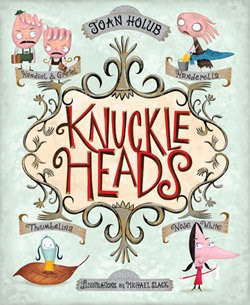 Oh, I get it. The character's heads are all made from hands. Knuckleheads.

No, wait. I don't get it. Aside from all the obvious punning around -- Thumbelina is really a thumb. Handerella in love with the handsome Finger Prints -- why do this? Remove the gags and what you are left with is a second-rate attempt at retelling fairy tales the way Jon Scieszka did over a decade ago with The Stinky Cheese Man. Hold up, let me look at this again.

Nope, didn't work for me a second time. Or a third.

I think the problem is that it's trying too hard to be clever when it should be focusing that attention on making all that cleverness entertaining. If you want to use puns and wordplay to tell a story you can't neglect the fact that you still have a story to tell. Merely hanging verbal gymnastics on truly tired fairy tales isn't enough(and, really, at this point kids probably know more about classic fairy tales then have actually read the originals), you need to apply that same creativity to the stories themselves.

The reason The Stinky Cheese Man works is because it is a reinvention of the story. You could make an entire collection of fairy tale updates using pigs and call it "The Gingerbread Ham and Other Curly Tails" and it might appear clever (Huh, I just made that up! That was easy! I should write a children's book!) but if it's just the original story in a pig suit, well, what's the point? You see what I'm saying?

Yes, Knuckleheads is chock full of cleverness, probably more cleverness per page than any number of books out there right now. It just doesn't entertain as a collection of stories. If this had been a collection of illustrated puns that were thematically linked I wouldn't have any qualms. It's the unnecessary layer of fairy tales forced to lend some legitimacy to the proceedings that doesn't work.

The Trouble Begins at 8 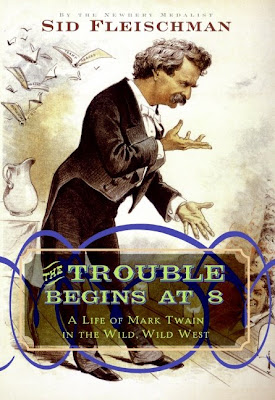 A Life of Mark Twain in the Wild, Wild West
by Sid Fleischman
Greenwillow / HarperCollins 2008

Mark Twain was a self-made man. Fleishman acknowledges this when he beings this biography of the writer's early years by laying his birth date as some time in the fall of 1865. This, of course, is around the time that the man from Hannibal, Missouri officially used the pen name Mark Twain while writing travelogues during the California Gold Rush. For this point Fleishman backtracks a bit to sketch in the life of Sam Clemens up to that moment he became Mark Twain and then continues forward from there to when Twain first became famous as a humorist on the lecture circuit.

It's an entertaining and breezy read though at times it falls flat in the telling. It seems at times that Fleishman is attempting to give the text a folksy patina, perhaps an homage in imitation to Twain's narrative style, but it seems long-winded at best and feels unsourced at worst. Not that Fleishman hasn't done his research and claimed his sources - no, no, it's all there in the appendices - but that the narrative flourishes almost beg challenge.

Still, Sam felt himself to have entered a paradise of solitude and untouched scenery and deliverance from care. The greatest human achievement to behold was the breathless glimpse of the lone and unarmed Pony Express rider, carrying mail through Indian country on his eight-day dash across eighteen hundred miles of the wild West to Sacramento.

The young boy in me reading that passage says "Oh, come on!" while the adult me wonders whether it was Twain who found the Pony Express the greatest human achievement or Fleishman editorializing in his own breathless text. Yes, there's a lot of text like that, and were Twain's life any less entertaining the book would immediately bog down in the swirl of it all.

Still, for the middle grader reader looking for a little more depth than most biographies on Twain aimed at their level, or for the younger reader reading up, this is a serviceable overview of how Twain came to be Twain.
Posted by david elzey at 4:43 AM No comments: