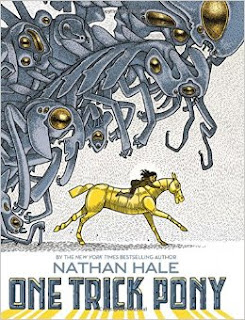 The future of Earth looks pretty grim here. Humans have reverted back to their near hunter-gatherer state, though in a relatively short period of time as they are still away of the sort of technology we are looking at in our not so distant future -- things like sentient robots, and space shuttles that the robots know how to pilot. The problem is that there are probes out there, called pipers, collecting all the metals and technologies they can find, gobbling their way across the planet like massive termites, putting bubbles around valuable minerals and metals and sending them to the sky to... well, they're gone.

The story starts with a trio of forgers who are hunting for anything the pipers might have missed, members of a caravan of massive vehicles that contain and entire community and are serving as an ark to help rebuild mankind. Strata, a headstrong girl, discovers something buried in the sand in a cave, something the pipers missed: a full-sized robot horse named Kleidi. Strata's contact seems to have awakened the horse and set up a bonding between them. Freeing Kelidi from the sands they discover a whole technology center underground full of robots that had previously been powered down, and when powered up their electronic signals alert local pipers who come to capture as much as they can.

But Strata, Kelidi, and the others escape. Barely. Barely escaping is what they do best throughout the book.

Saying much more is probably too much, and more than I knew going in.

There's a side tale of the Pied Piper that is used to explain the pipers here, but it's a McGuffin, a ruse, and a clever one at that because the reality of what is going on has nothing to do with what the survivors understand to be the truth.

And what of that pony and it's one trick?

Ah, well, what that trick is comes pretty quick, and it occasionally has something to do with the many close calls our heroes has, but can that one trick save the day? 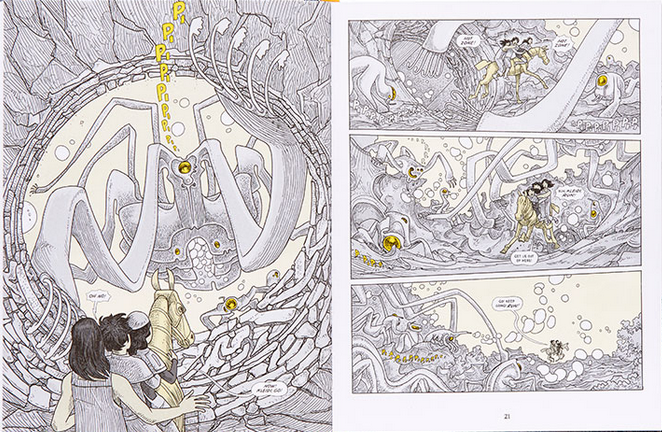 About half way through this book I wasn't sure it was going to end satisfactorily. I was actually saddened to think I was either going to abandon the book or write a negative review. Actually, my biggest concern was that it was a set-up for a series (which it still could be) that ended without a resolution. But no, the story arc works, and given that machines are involved, a little deus ex machina isn't a bad thing here.

Hale is known to many for his nonfiction Hazardous Tales series of graphic novel history, but when he steps away from that (Rapunzel's Revenge, Calamity Jack, both with Shannon Hale) he leans in hard on the fantasy. Here, the dystopic sci-fi agrees with his style, so much so that the pipers initially reminded me of the work of the late French artist Moebius, and the muted one-color palate gives the world he's created a slightly grimy metal feel, as it should.

Adults worried that it might be too intense for younger readers should let the readers decide. As with all books really. I'd think a 5th or 6th grader into sci-fi (as I was into Bradbury at that age) would dig this pony. And they wouldn't think twice about the fact that the main characters are a girl and her horse.

Posted by david elzey at 9:58 AM No comments: 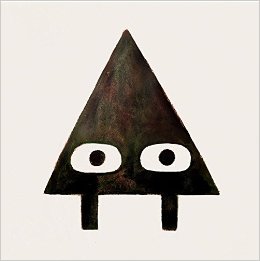 Triangle, an equilateral with a pair of eyes that look like painted white rocks and legs like burnt matchsticks, lives in his triangle house on the triangle side of his world. He goes out his triangle door one day, past where Triangleville becomes the Land of Shapes With No Name, into the Squaresville, where Triangle's friend Square lives.

"Now," said Triangle, "I will play my sneaky trick."

Triangle's sneaky trick is to hiss like a snake -- because Square HATES snakes -- until Square is so afraid that Triangle is doubled over in laughter and cannot hiss anymore. Once Square realizes he has been tricked the chase is on. Past Squaresville, the Land of Shapes With No Name, and finally into Triangleville where Triangle runs into the safety of his triangle home.

And where Square, too wide for the shape of the doorway, becomes stuck.

And then it is dark, and Triangle is afraid of the dark.

And Square claims it was his plan all along to play his sneaky trick on Trinagle.

But was it planned?

It's a punchline story, a chase cartoon with a simple ending and no real resolution, but completely within the realm of how children play. Klassen and Burnett have teamed up before with the existential Sam and Dave Dig a Hole and old world magic charm of Extra Yarn, but the depth of those stories is lacking here.

Maybe that's as it should be, as this board book on steroids with its heavy board cover and the simplicity of something intended for readers still young enough to chew their books. This is the opening salvo for a series of beginning readers -- Square and Circle will follow -- and I would hope that future stores had a little more meat to their rocky bones. As it stands it's cute, in a borrow-don't-buy sort of way.
Posted by david elzey at 7:24 AM No comments: