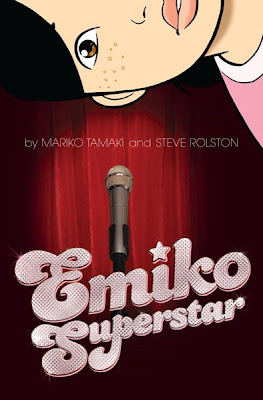 When DC Comics decided to launch its line of graphic novels aimed at teen girls I thought they were on to something, especially when I saw that they'd taken on YA author Cecil Castellucci for their inaugural title, The Plain Janes. It was an awkward start, as the pacing of that first title seemed a bit off, but the story had heart and its heart was in the right place. I had hope for them.

But subsequent releases didn't hold up for me, and it didn't help that the stories were written by guys. Should that make any difference? No, but in the world of YA -- the target market -- it takes a fairly sophisticated male author to capture female characters believably, and if that's your target market you really need to pay attention to what they want. So the fact that Minx closed shop at the end of 2008 wasn't really a surprise to me in the end. Their tag line was "Your life. Your books. How novel." How ironic, really.

Finishing Emiko Superstar I can't help wonder if Minx would still be around if this had been their second offering, and if they had bothered to collect a bunch of female voices to carry their line. On the face of it the story isn't really any different than any other teen tale of self-discovery -- male or female -- but its the strength of the voice and character that really works here.

Emiko is going through that summer when something momentous happens that changes her life forever. Having lost her corporate coffee shop job, Emiko lands a babysitting job with some neighbors while at the same time accidentally discovering an underground scene full of performance artists called the Factory. Emiko the shy and timid is nonetheless Emiko the searcher and she investigates this scene full of freaks, totally mesmerized by the star performer, Poppy. While trying to get up the nerve to perform at the Factory, Emi discovers that the wife of the couple she is babysitting for is keeping a secret diary. Using some of her grandmother's clothes from the 1960s, and selecting bits of the diary, she becomes a poet-performer mining trapped suburban housewife angst. As Emi's star rises Poppy's falls, and the attention of the Factory's "curator" leads to a shuttering of the scene. Emi realizes that she's found a window into her true self, and by the end of summer knows is only a question of discovering the rest of her untapped talents.

Getting back to this idea of gender, this story could have been told through either a boy or a girl protagonist, but the fact that it's a girl emerging from her own geeky shadow is less typical. Admittedly, it would be more adventurous to have all the genders reversed and to see a female impresario playing favorites with a bevy of boy toys, but that would also be less realistic. Girls seeking attention and self-expression fall into the hands of those who will best exploit them, which all too often are men, and what's nice here is that Emi is shown uncomfortable and yet just strong enough to resist the negative aspects where others do not.

I've already written an obituary on Minx, and I still think that current business models neither can take the time to develop a brand, or to gather the roster necessary to make it fly before declaring it a failed product. Note to other publishers: girls are still not being served.

I wrote this before the finalists were announced for the Cybil Awards graphic novel category. Once they were announced I was bound by my role as a judge not to publish this review for fear of showing favoritism. It turns out I wasn't alone in feeling that Emiko Superstar was a worthy title: it has won this year's Cybil for Graphic Novels in the YA category.

A Balloon for a Blunderbuss 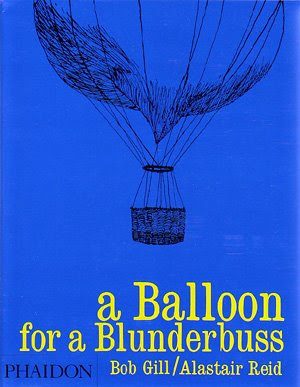 One of those strange things about the publishing industry I'll never understand: Why would they let something like this slip out of print and out of their hands? Things being what they are, it's sad to see the short-sightedness of ignoring your history and your backlist.

Based on the simple premise of "what would you trade me for this" a butterfly is offered up, and through a series of trades -- for wishbone, a wishbone for a flag, a flag for a straw hat -- finally is traded for an island and everything on it. Of course, when asked to see the butterfly in hand it flies to freedom, proving that some things cannot be possessed, much less traded.

The simplicity of the idea is matched by Gill's graphics, isolated images in thick, inky lines and filed in with a single spot color, occasionally two at the most. Gill, who is a major influence in graphic design (and, oddly, also co-created Beatlemania for Broadway) understands a concept seemingly lost in today's picture books: less is more. While I agree that modern printing has permitted any number of miraculous picture books to be produced, I sometimes feel like gazing at a wall of picture books in a bookstore these days is the equivalent of staring at the signage of Times Square at night when what one wants is a cup of tea in a zen garden. 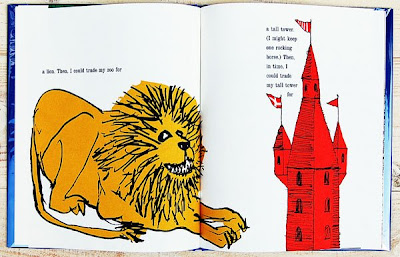 There's a lot of similarity with the travel picture books of Miroslav Sasek, both in illustration and simplicty.

Simple stories, simply told, simply illustrated. No fancy digital manipulations, no full page bleeds, no extraneous cleverness or in-jokes or asides scattered throughout the illustrations. The book isn't trying to compete with movies or video games or the presumption that a reader needs to be inundated with images to hold their attention.

I understand Phaidon has reprinted another Gill title, What Colour is Your World, and has also reprinted Tomi Ungerer's The Three Robbers. They may be onto something.
Posted by david elzey at 12:29 PM 2 comments: 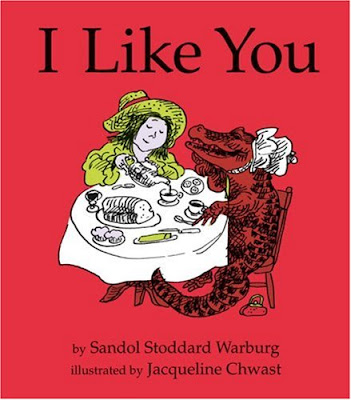 My wife likes to say I have a sticky brain. This is a fairly accurate description of my proclivity to spout lots of useless bits of cultural flotsam that I can recall at a moment's notice. I can, for example, sing jingles from television commercials that haven't aired in over 35 years without the crutch of revisiting them on YouTube. I can, with the briefest of information, recall the actors or titles of movies as people try to describe them. I am horrible at the stuff I was supposed to learn in school, but I often get the obscure questions correct in Trivial Pursuit.

Years ago I came across a single panel cartoon -- reprinted in an issue of Utne magazine, if I'm not mistaken -- that made me laugh with a sort of recognition that could have sunk my spirits if it caught me on the wrong day. In it, a portly gentleman is among a handful of people in a movie theatre, staring at the screen in horror. The caption (approximately): "Roger suddenly realizes that one of his treasured childhood memories is actually a scene from a movie." I took this to be Roger Ebert, Pulitzer Prize winning movie critic, and I knew all too well how that felt. So many times as an adult, revisiting old movies I might only have caught a glimpse of on television growing up, I have scenes come rushing back like a sudden gale force wind. It is, indeed, an odd thing when a memory from childhood presents itself and demands recognition.

So for years I have been using the phrase "goofus on the roofus" as a term of endearment for those who have behaved silly. Certainly with my girls, though I have done it to friends as well. In my mind the full phrase was always "goofus on the roofus, hollering your head off" and, when the situation called for it, I would use the whole line. I cannot recall specifics, but I have no doubt I have referred to at least one individual in Berkeley (known by many as The Hate Man) precisely this way. Something to do with his daily ritual of standing on the roof of his apartment building, in full view of my dorm room, naked, shouting at the sun in some ritualistic fashion.

Recently, I dropped by my local children's book store and saw I Like You sitting on the counter. I'm not generally convinced that impulse items placed by the check-out counter are really deserving of the space, but there was something about this book that caused me to pick it up. It had that look about it that said "Remember me?" and so I had to find out whether it was, indeed, another treasured childhood memory coming back to claim it's rightful place. I used the time-honored tradition of the Random Page Test, and this is what I landed on: 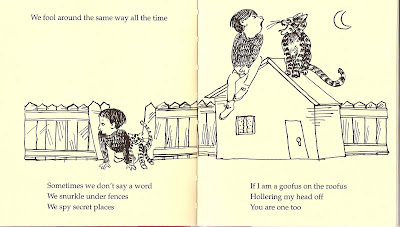 Another gap in my past bridged.

The 1960s seemed like a time when children's books were not only finding their legs, but really testing the boundaries of their freedom. Nonsense and imagination took the place of linear narrative in a way that seemed to reflect the restless nature of a post-war, baby boomer childhood. There are glimmers of this in Ruth Krauss's Open House for Butterflies and Remy Charlip's Arm in Arm, collections of prose-poems and story-etts and snippets of the kind of nonsense that resonates with a playground sensibility.

Warburg opens with the declarative "I like you / And I know why" and proceeds to explain all the reasons why. Many of the reasons are as intimate as being able to share secrets, or share feelings, and they aren't always positive. "I like you because if I am mad at you / Then you are mad at me too // It's awful when the other person isn't // Phooey." And the book continues with this examination of friendship until finally concluding, with the only true response to such a query, "I guess I just like you // Because I like you."

Chwast's illustrations have that loose, spontaneous quality of having quickly captured a moment, almost as if they were taken from a sketchbook. With each page the subjects change so that there is no particular individual serving as the "I" throughout; boys and girls, men and women, young and old, and all the various combinations, each used to help illustrate the quasi universal elements that build a friendship. I say quasi because, unfortunately, the book suffers that lack of diversity that would come a few years down the line in children's books. Everyone depicted is clearly of European descent (or an animal). I wish Chwast had been more forward thinking and given us just a bit of the old UN casting here. It would have gone a long way toward promoting not just the ideas of friendship, but that these things are universal across the spectrum and the sort of things that bring us together.

Still, it fills in yet another gap in my endless quest to rebuild the library of my youth and explain one of my more curious expression. I'll continue to call people goofuses on the roofuses when warranted, only now I'll know where it came from.

(For those reading comments, I don't normally go back and revise posts once "published" - I prefer to stand here warts and all - but this time the gaff Mr. Florian pointed out didn't sit well with me. I only mention it so the comment makes sense.)
Posted by david elzey at 9:46 AM 3 comments: