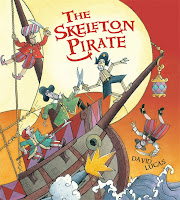 The unbeaten Skeleton Pirate who refuses to accept defeat is beaten not once but twice in this quirky picture book.

The Skeleton Pirate knows one thing: that he will never be beaten, and will fight to the, uh, death to prove it. But when a band of pirates chains him up and throws him over board... he still will not accept defeat. rescued by a Mermaid he is free for but a moment when they are both swallowed by a whale. Still refusing to accept his plight the Mermaid has a plan to help them get out of the whale, which succeeds, and sends them both sailing into a golden sunset on a gold-filled ship made of gold, where the Skeleton Pirate looks into those Mermaiden eyes and accepts he has finally been beaten... by love! 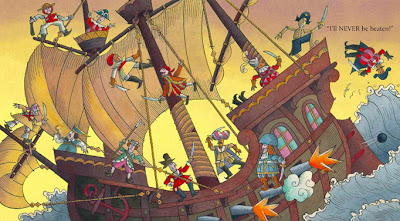 While the title might sound on the scary side, younger readers aren't going to be put off by the stylized Skeleton Pirate Lucas has created. Looking for all the world like he might actually be made of balsa wood, he's so far from reality that no child would even consider asking the really big "adult" questions like: Why does he only wear pants? and; "If he's a skeleton, isn't he already dead?" and; "Why is he so cranky?" In truth, I missed the biggest clue of all on the title page where the Skeleton Pirate appears to be emerging from the wreckage of his own ship. Not to read too deeply here, the Skeleton Pirate is a lost soul doing the only thing he knew how to do until something (or rather, someone) came along to show him the truth.

Lucas is very crafty in not letting the romance show up until the final image and gives up a goofy tale in the process. Lucas has a thing for whales, and the sea, and this time around his watercolor palate feels much bolder. I'm a fan.