I Am Rosa Parks 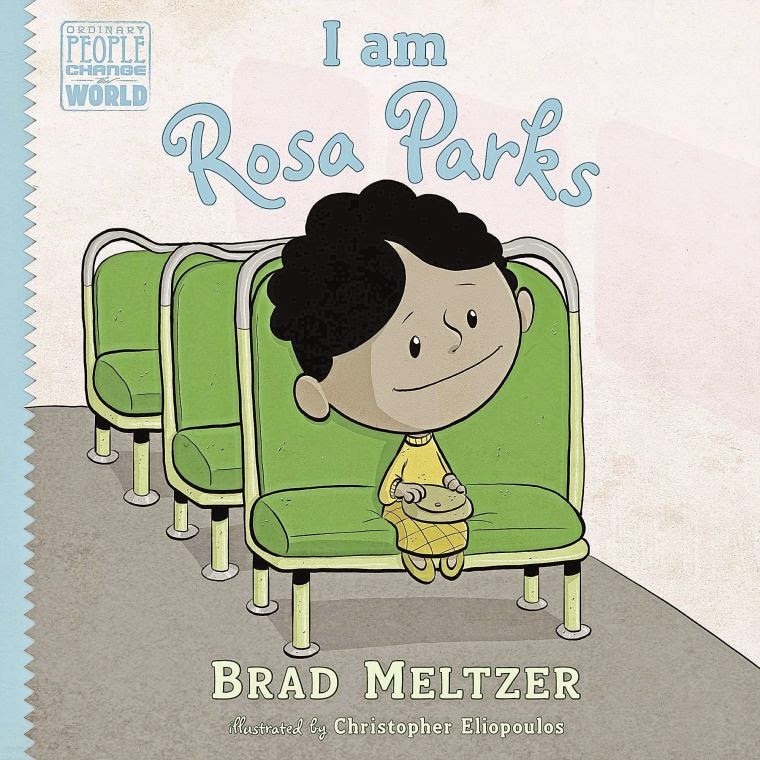 I am Rosa Parks
By Brad Meltzer
Illustrated by Christopher Eliopoulos

Now that we have Phillip Hoose’s Claudette Colvin: Twice Toward Justice out in the world I feel it is incumbent on anyone treading toward teaching kids about the Civil Rights do so with a more open understanding of history.

Rosa Parks was chosen as the symbol for a bus boycott, and sometimes what you need is a symbol to make history, but you need a balanced and more nuanced hand to tell history, especially to kids.

Parson Weems is responsible for the story of George Washington and the cherry tree, a myth so prevalent that kids know it almost without being taught. For Weems, writing over 100 years ago, the idea of mythologizing American heroes was a conscious effort meant to galvanize a national pride. But we’re smarter than that now, right?

Meltzer – better know to adults as a writer of adult thrillers – spends a great deal of the this book painting Rosa Parks as a child who always stood up for herself, leading to her taking a stand on that famous bus seat. This is well and good, but then we jump ahead to the Civil Rights and her meeting MLK and a happy little ending about how important it all was that she stood up for herself.

But she wasn't the first.

Don’t kids deserve to also know about the young Claudette Colvin who preceded Rosa Parks by a full 9 months, the first person to actually be arrested for protesting the segregation of public busses? Certainly there are ways to skip the messier parts of Colvin’s story, or to include them within context, but to ignore that part of history altogether? Well, that's just inconvenient toward the narrative.

This book is part of a series “Ordinary People Change the World” which is a great idea in theory, but the other people in this series include Lincoln, and Amelia Earhart, neither of whom were really that ordinary when you think about it. I’m not trying to take anything away from Rosa Parks or from kids knowing who she was historically, but when it comes to teaching kids history there is a responsibility to get it right, to tell it right.

Some source material at the end of a biography would be nice as well. Unless, you know, it’s all just a storybook and not a history at all.

And maybe, just maybe, it could be written by someone who wasn’t white.

Posted by david elzey at 4:41 PM No comments: