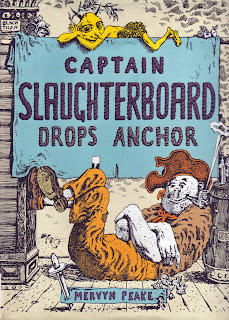 The Captain and his oddball crew settle in on an uncharted island where they encounter a creature the color of butter and then... do nothing?

The good Captain is a bruiser who has run through his share of crew. His ship, The Black Tiger, has lost many a men to sharks and the plank leaving only five bizarre scallywags for company. One day they spot an uncharted island and go to investigate, finding among the unusual flora and fauna a pan-like creature the color of butter. "Just exactly the sort I've been wanting!" the Captain says cryptically. Entranced, the Captain quickly spends all his time looking at, doting on, dancing with, and generally hanging out with the Yellow Creature, so much so that the crew are reduced to doing little more than acting as servants or a bored audience. The Captain is so happy with his new life on the island that he finally decides to give up pirating for good. His crew (presumably with the ship) have long departed, and to this day the Captain and his Yellow Creature are there on their island, eating exotic fruit and watching the sun set and dancing hornpipes whenever they please.

It's near impossible to explain this picture book's weird vibe. Peake's illustration style in this book is like a whimsical version of the stuff Basil Wolverton was producing for MAD magazine in the 1950s. With exaggerated, elongated facial features and preposterously proportioned bodies, Captain Slaughterboard and his crew are beyond misfits, beyond human, perhaps only one evolutionary rung above the fantastical creatures of Edward Lear. In addition, Peake's handwritten text give the book the feel of a journal or an illustrated captain's log.

As for the story itself, my modern reader's brain wants to know a whole lot more about what Peake's intentions were. The Captain has clearly been running through men in search of something, seeking out some unknown something that has driven him at the expense of others. But then when he finds the Yellow Creature the effect is identical to that of falling into a blind, fawning love. The Creature's coy, almost fay expressions seem to acknowledge the Captain's stirrings and perhaps indicate the feelings are mutual.

Is this crazy? A story about a pirate captain at the end of his career finally deciding to retire on a remote, deserted island and setting up home with an exotic native?

Alright, I'm going to set my adult goggles aside and try to look at this again. We've got a rough pirate captain driving what little of his crew he has to find some new thing, something never before seen or imagined. Finding the Yellow Creature and his island the Captain has finally found what he was looking for, but the crew comes to realize that this is not what they signed up for, and they depart. The crew sails off into the sunset (unseen, they simply disappear from the book half way through) and the Captain spends his sunset years happily in his island paradise. What's wrong with that?


By modern standards, what's wrong is that there's no real character development and little plot conflict to speak of. The Yellow Creature is an enigma. There's almost something menacing about his silence and manner, with facial expressions that can be read as innocent or seductive or duplicitous, and understanding his intentions might confuse younger readers.

Or maybe not. Kids don't question an owl and a pussycat sailing to far away lands and getting married by a pig, they don't think twice about forests full of bears who live in houses and sleep in beds and eat porridge, and pirates are simply cool.

Another curiosity no longer in print, though still available in libraries and worth a peek. 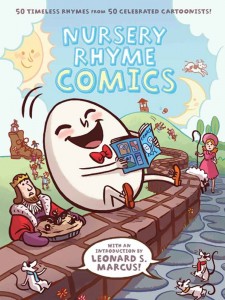 There are a number of ways to approach nursery rhymes. You can either take them at their most surface story level. You can interpret them literally or figuratively or historically. You could also enjoy them strictly for their sound, for the way they roll with linguistic cadences. And with subjects like animals behaving oddly or inanimate objects coming to life or simply reveling in the absurdity of fairy tale-like imagery it is easy to see why nursery rhymes endure: they are wide open to interpretation and imagination.

Mother Goose and other nursery rhyme collections tend toward the cute, or the sweet, or at the very least, non-threatening. Most collections settle for a single image or two that illustrates some element of the story and leaves the rest out. For the truly young the story and the image become linked, forever lodged without explanation or the desire to even understand. It's a marvelous and sometimes bizarre thing to plant in a young mind the image of a Jack and a Jill tumbling head-first down a hill simply for doing their chores. 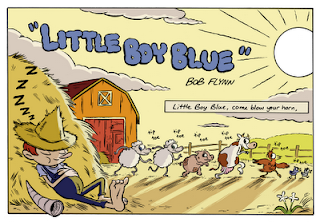 Sequential visual narratives strive to tell a story not only in the pictures but between the panels. Like picture books, they extend the characters and the narrative from one to the next, each panel like a page unto itself, each transition like a page turn. Structurally, comics and graphic novels make for great transitional narrative for readers as they are dialog driven and tend to build scene upon scene. Add nonsensical nursery rhymes and the interpretation of cartoonists and you've got quite a wild ride.

How many times have you heard or read Humpty Dumpty? How does it end? It ends in tragedy, like Shakespeare, inevitable and unchangeable. Ah, but cartoons have a long history of the punchline, the change-up at the end, a twist that turns everything on its ear. What if the Egg Man fell, cracked open, and out sprang a half dozen smaller versions of himself? This is precisely what Gilbert Hernandez does in his retelling, and in doing so transforms the familiar into the new.

In other rhymes the narrative is subverted for a parallel story not even hinted at in the original. Little Boy Blue remains a farm boy shirking his duties, but here the barnyard animals are the ones who are featured. Bob Flynn has the sheep in meadow throwing Frisbees, and the reason no one is willing to wake him is because the animals have a pretty good poker game going on. 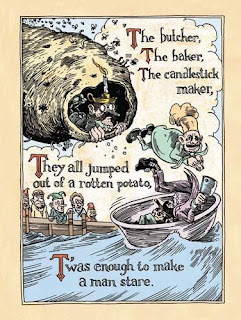 On the historical front, leave it David Macaulay to turn London Bridge into a lesson about all the different architectural forms the bridge has taken in its time. From rickety wood to stone and steel, Macaulay manages to erase the notion that the rhyme is only suited for playground games where some unlucky sod gets caught in the gated arms of classmates (usually some boy trapped between two girls).

The collection of cartoonists involved is fantastic. Personal faves include Jules Feiffer, Eleanor Davis, Craig Thompson, Sara Varon, Marc Rosenthal, Kate Beaton, Tony Millionaire... a collection too numerous to mention. Most I have encountered somewhere along the way, either in alternative comics or picture books or graphic novels, and with the exception of a single artist whose style I just don't care for I find them all to be equally suited to the task.

For most families with children I would say this shouldn't be the first or only collection of nursery rhymes. But for those who might want a second book this might make a great addition for the family with a new reader looking to read nursery rhymes to younger siblings. It'll make them the hip and cool kid who introduces their kid brothers and sisters into the joys of reading, storytelling, and the slightly subversive world of comics.