status not so quo

I haven't been doing enough of any of these lately.

Actually, I have been reading. Quite a lot, and much of it kidlit. I keep meaning to come here to the ol' blog-a-roo and load up what I've been reading but...

And while I've been incredibly busy with a number of writing projects I still don't feel like I'm getting enough done...

But blogging? That just fell off the face of the earth.

So I'm gearing up for a soft relaunch here at the excelsior file and am looking forward to getting back in the groove.


Feel that? That energy in the air? That's my groove. I'm working on the harness so I can get that groove back on.

For those of you still out there, reading; soon.

A Little Book of Sloth 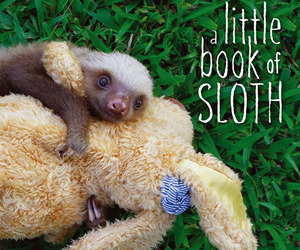 This non-fiction book, ostensibly for kids, should forever change the synonym for sloth from "lazy" to "cute."

Many decades ago when I first learned about sloths and their sloth-like behavior they seemed to me a perfect insult. Calling someone a slug was up there but there was nothing that rolled off the tongue quite like "move it, you sloth!" All I knew of sloths were that they were slow, tree-dwelling, and, uh, slow.

But how slow? I couldn't tell you. And when you think of something as 'slow' there's also that connotation that they might not be as quick-witted as other creatures as well, but was that true of the sloth? I also assumed that the reason they were green was because they were too lazy to groom themselves, but it turns out that there's a very good reason NOT to groom away that algae in their fur.

I know now, and I think many adults will learn quite a bit from this book as they read it to their little ones.

There is a place called Slothville in Costa Rica that is a sanctuary for orphaned and injured sloths. As pictures from this book reveal, even a creature that looks like a cross between a kitten, a piglet and a hedgehog that's been stretched out can be awfully cute. They appear to be the most mellow of jungle creatures, sleeping 70% of their lives away (though no one knows how long that lifespan really is), chowing down on green beans and hibiscus flowers, and hugging, hugging, hugging.

Oh, and I now know that a full-speed they top out at fifteen feet per minute.

And the images make this book. Cooke's fondness for sloths is equally matched by their cute-overload behavior. Hugging stuffed animals, hugging each other, their odd (and equally slow) bathroom routines, and three words that really ought to become a catchphrase for something: bucket of sloth.

Sloths for the win!
Posted by david elzey at 8:16 AM No comments: