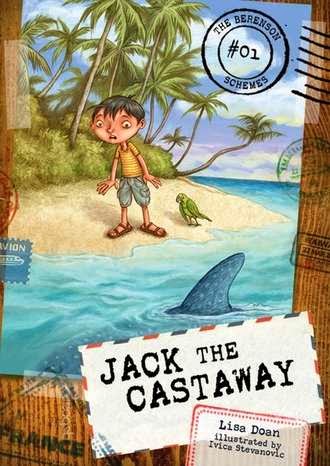 Smart kid, dumb parents, and a menacing whale shark! What more could a kid want from a book?


Jack is a sheltered kid on the cusp of puberty living with his Aunt Julia safely in Pennsylvania. Or at least he was living safely until his Aunt met with misfortune and Jack was forced to call his world-traveling parents home from their latest scheme, panning for gold in the Amazon. Jack's parents are everything Jack isn't: reckless, thoughtless, careless dreamers with no grounding in reality. Since abandoning Jack with his Aunt they have gone from one dead-end business to another but now they are forced back to raise a son who has more sense than they do collectively.

So begins Lisa Doan's Jack the Castaway, the first in a series aimed squarely at the emerging, struggling, or reluctant middle grade reader looking for an adventure series with humor and a sturdy story. Playing off the trope of kids being smarter than the adults that surround them, Doan has amped up this discord by giving Jack all the typical traits of a worry-wort adult and made his parents the equivalent of hyperactive teens. Where his parents wouldn't never even think of making a list or a plan before setting out on an adventure, Jack prefers the logical order of his life and would rather spend his time in school. Reunited as a family, Jack's parents think it only natural to bring their risk-adverse son with them to a tropical island where they intend to open a snorkeling enterprise, despite having no experience. But before long Jack finds himself alone on the water, then shipwrecked on a tropical island and... is that a shark keeping watch on him from the shore?

There are many ways a story like this could go wrong, but Doan keeps a fine balance between humor and adventure, particularly when dealing with Jack's brief experience alone on a tropical island. Where many readers might find the prospect of being alone to do nothing, away from the school and responsibilities that Jack craves, it's Jack's practicality that allows him to stay calm and survive. Where Jack errs on the side of caution the reader is allowed to guess that he is overreacting, removing any real danger that would otherwise make the story too dark.

And while I wouldn't say I was much like Jack when I was young I will confess that he and I share a certain blood-chilling close encounter with a large, benign sea creature. Both Jack and I survived to laugh about it in retrospect.

There's a lot of summer reading out there that kids are having foisted on them, and while much of it is good I strongly believe that there's room for lighter, well-crafted fare. I realize this might skew a bit younger than most of what lands on Guys Lit Wire but sometimes boys need to catch the reading bug at a younger age to ensure they continue into the goods we reviewers dig up for the older teens. Put Jack the Castaway in the back seat on a long road trip and see if it isn't devoured in one single gulp.


This review also appeared at Guys Lit Wire, in case you thought you saw it somewhere else.

Also, as a matter of full disclosure, I received a review copy of this book from the author who, like myself, is a graduate of the Vermont College of Fine Arts' Writing for Children and Young Adults program. If you find this troubling, email me, I'll be more than happy to put your mind at ease.
~d.e.
Posted by david elzey at 10:03 PM No comments: