A Crooked Kind of Perfect 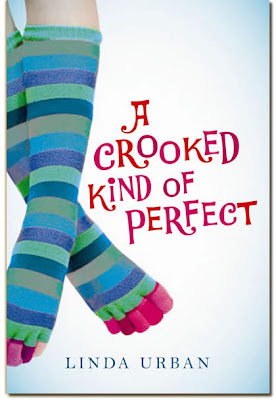 Zoe wants a piano. In her mind she considers herself a piano prodigy waiting to be discovered. She's just a baby grand away from Carnegie Hall. But when her easily-distracted dad is charged with procuring the instrument he returns home with a cheesy Perfectone D-60 organ, complete with electronic rhythm sections and lessons that feature television theme songs in its practice book. When her teacher discovers that Zoe has some talent she convinces her to enter the annual Perform-O-Rama competition. And much middle grade hilarity ensues.

No, actually, it doesn't. What happens is much anxiety ensues, as Zoe is forced to attend the competition with her agoraphobic father who leaves poor Zoe in the care of her music teacher who, in turn, passes her off to another family she knows while he cowers in a hotel room. In that respect the book takes an unsettling turn because it really does feel the girl is at sea in the end. I'd like to say I thought this was a case of good writing but I can't imagine the author intended for the reader to feel anxiousness over her well being instead of the suspense of the competition.

It's funny, because until I sat down to write this I hadn't thought about how unnerving the end of the book was. In fact, I'd read recently that some consider this to be the best middle grade book released this year, and I might have given it that if I hadn't started thinking about it. Finishing the book my only qualm had been that there is an inconsistency between Zoe being told there was no classical music available for her organ, and no music beyond the 1980s, when in fact both appear throughout the competition with little mention. I thought it too minor to point out.

But what of the subplot at the beginning, where her best friend from the school year previous has dumped her ceremoniously for not being, well, Bratz enough? In the end it seems the only reason for her inclusion is for the sudden appearance of a certain baby grand at the end of the story and a good graphic for the cover. And what of that other strange subplot, the one with the boy who might be her boyfriend who hangs out with her dad all the time in the kitchen baking? Wait a minute, doesn't Zoe's mother use a mirror to read scores over the judges shoulders so she can calculate scores in the competition?

Now that I think about it, I haven't encountered this much head-scratching since... The Higher Power of Lucky! This book is exactly what a librarian might consider to be the perfect middle grade reader after all! There aren't enough "serious issues" to really make this award-worthy, but if the Newbery committee proves me wrong you read it here first.

So here's the thing. I read this because my youngest was hungry for something light and fluffy, something to read quickly between larger books, something to cleanse her palate. After I read it and felt I could recommend it to her she devoured it pretty much in a single sitting. It was perfect for the moment and easily forgotten when the moment was over, which was exactly what she wanted. I think that's good enough.
Posted by david elzey at 4:28 PM

Hm. Okay, so as I understand it, the book causes quite a lot of head-scratching for you . . . and is utterly and entirely forgettable after you read it. I admit that Newbery won't find as much meat as they like in this one (watch, it'll get an Honor) but the way the review is written it sounds as if the complications keep you from enjoying what might otherwise be fluff. I was fond of the unnerving qualities, so what precisely disturbed you about the book? Was it not the right balance of oddity and plot? Was the subplot too thrown together?

Yeah, in my muddle I'm not exactly clear about my muddle. What happens is I read this book and went "Huh, pretty fluffy, but not objectionable, I'll let my youngest read it." Then a few days later someone says they've heard good about it, built up to the point where it felt like it could become a letdown.

Hmm. I think about the story a bit and, yeah, okay, it had some flaws. Then others started chiming in about how much they really didn't like it and I start thinking "Wow, that's interesting, that totally glossed over me." One person referred to it as the kind of book written for the child inside adults rather than for children proper.

So to answer your questions I don't have a problem with oddity/plot balance per se but I did find fault with the subplots. The subplot with the boy feels undeveloped and the one with her best friend seems very deus ex machina.

Yeah, Honor sticker. That makes sense. tell me, Fuse, if this had been in consideration alongside The Higher Power of Lucky last year how do you think it would have fared?

Now this is an interesting query. I was on the Newbery committee last year, so as weird as this sounds, I don't think I can answer this entirely theoretical question. How odd, eh? The most I can do is talk about its chances this year, and though I said "Honor", don't believe a word out of my mouth. The trend with awards is always to go with the older material. Wednesday Wars is the horse I'm placing all my money on this year. They're saying Emma Jean Lazarus Fell Out of a Tree has a chance, but again I'm skeptical. If 2006 was the year of the girls, perhaps 2007 will be the year of the boys. Leepike Ridge has a better chance than most things, so we'll see.