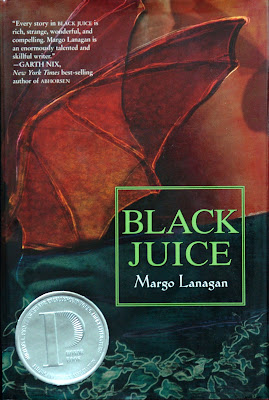 Having been given a number of "warnings" about the intensity of Lanagan's most recent book, Tender Morsels, I decided to get a better sense of her writing through one of her short story collections first.

I wish someone had warned me about this collection as well.

Lanagan is an intense writer of dark, emotional, human fantasy worlds. There are echoes of older cultures and languages buried deep in these worlds, a sense not so much as coming from another planet but as if reading reports from undiscovered country. It is the type of fiction that reads like literary reportage from a past frontier transported through time. Like something forbidden, these stories are a black juice indeed.

The collection opens with "Singing Down My Sister," a strange description of a ritual that involves sending a woman out into the center of a lake of tar. Knowing Lanagan hails from Australia, and having grown up with the tar pits of LA, it wasn't too illogical a step for me to imagine a sort of hybrid Aboriginal culture that appeared to be redressing some sort of wrong through an old, odd cleansing process involving tar. But no, this is clearly something else as the event at hand is actually an execution, a slow death in front of an audience with a wake built in. Equally fascinating and disconcerting, the effect is how I would imagine it to be watching surgery being performed on myself while fully conscious.

Short story collections by their nature must start off strong and bold. They must open with a story full of promise for the rest of the collection yet not be so strong as to let the reader down along the way. Reading "Singing Down My Sister" it almost feels intimidating to continue with the rest of the book. If the rest of the book is anywhere near this intense it might be impossible to finish.

Each of the stories contained so completely build their worlds – unique and richly textured worlds at that – this it is possible for each story to sustain its own book. "Red Nose Day" delves into a dark world full of professional clowns and the hitmen who kill them, with more than a hint of allegory aimed at the Catholic church. "The House of Many" posits a clash of parallel worlds that fluidly includes a Middle Ages cult surrounded by a more contemporary society rich with cars and candy. Demonic angels that help children break free of oppressive adults. Queens who prefer the company of dancing gypsies to their own kingdoms. Lanagan plucks the familiar image and icon and from our consciousness and folds them deftly into something new, a magical literary origami.

I think the warning I would have wanted was more in the form of advice. I think these stories should be savored slowly, with a lot of space between them. Perhaps as ways of cleansing the palate between other books. One after another, the power in these stories makes reentry into the world difficult. Better to dip into these waters with some reserve.

Whether this has helped me to better enter the world of Tender Morsels has yet to be determined. As it stands, I feel richer for the diversion.
Posted by david elzey at 10:38 AM

I have to admit, I started reading Tender Morsels and got so depressed I quit. (Shaun Tan's Tales from Outer Suburbia is more my speed, speaking of outside-the-box short story collections like Black Juice.) --Book Aunt