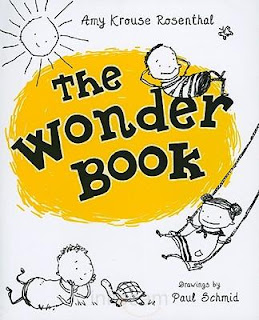 
A fine collection of illustrations, accompanied by an okay set of poems.

I admit, sometimes I come to books from odd directions, especially illustrated books.  A good deal of my life has been dedicated to a number of visual arts and occasionally that is the greater draw for me.  I'll forgive weak content over strong visuals, and sometimes I'll even miss the weak content.  Not here, though.

Paul Schmid is an illustrator I would hire to do spots drawings for my mythical magazine I hope to one day start.  His black and white line drawings do echo Silverstein, but there's often more than meets the eye.  They have a childlike whimsy and an innocence about them, his characters all blobby and bendy and spindly at the same time.  And there are the odd details that beg you to dig further, to look back at the text, and find the invisible connecting thread between them.  Yes, I'm talking here about the elephant on the page.  Literally.

Rosenthal's palendrome is nothing new – I have it in at least two other books I own – so it falls to Schmid to give us a new reading with his picture.  And what do we have?  A small boy in a striped shirt (or old fashioned one-piece bathing suit) holding a shovel and a pail and wearing only one rain boot.  Cute, but that's not all.  Flanking the boy on either side are a pair of elephant rear ends, both facing the boy.  For a boy who looks primed to try and shovel several pounds of maneuer into a two pint bucket it is, indeed, too bad his is minus a boot.

Not every illustration contains such quiet gems, but then the poems don't always exactly inspire more than a literal representation.  Which is not to say this is a terrible collection, but it is a weaker one for the effort.  I think it is far too easy with poems for children to go for the rhyme or the unusual without actually stretching the imagination.  When I look at poems for children  – especially humorous poetry – I am looking for something that would make both me and the reader wonder how a mind could come up with such images, such quirkiness.  Puns and palindromes and the recasting of nursery rhymes are fine, but lacking a theme or the spark of something truly unique the collection becomes pedestrian.

This is the sort of thing writing students toss off to keep the juices flowing, a game of Tweak the Familiar.  It dosen't really satisfy as nonsense because it doesn't take enough of a risk to differentiate itself from the original or stand out on its own.

The lasting effect of this collection was that when it was over I had to start over again because I couldn't remember a single poem.  But the illustrations were fun.
Posted by david elzey at 8:29 AM