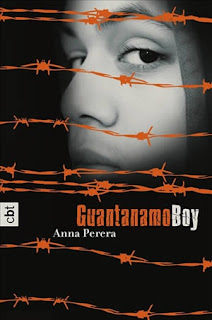 On a family vacation to Pakistan sis months after 9/11 a teen boy is picked up as an enemy combatant and taken to Guantanamo Bay where he is tortured, all the while wondering how he got there...

This is one of those stories you want to like, want to be able to recommend, have a hard time not putting too many eggs into your basket of hope, because it's a solid idea that just dies on the page.

Khalid is a typical Pakistani-British teen boy. Okay, maybe not entirely typical, he does seem a bit naive, but down the road he's just one of his mates when it comes to soccer and all. And like many a teen boy everywhere he's very much into online gaming, particularly with his worldly cousin Tariq. When Khalid's grandmother dies his parents decide they are going to visit the family in Pakistan during Easter break. Form there it's a drawn out hop, skip, and a jump before Khalid finds himself in a wrong-place-wrong-time situation and he's in Gitmo wondering why and how he got there.

This book was a slog unlike any I've endured in some time. If I didn't already agree with the politics of the detention center at Guantanamo – or rather, if I didn't agree that Gitmo was and is a terrible violation of human rights with little to justify it – I couldn't have managed past the first chapter. Written in a stilted and distancing first-person, with characters that fall flat and a plot that has to be sifted from the silt of information this book is crammed with, I kept hoping that soon, soon, it would turn a corner and pry my eyelids open. I know there's a good, and important, book in here somewhere, but it would take a team of gifted surgeons to find it.

So this story is out there, still, waiting for someone to tell it so that young readers can see what's really been going on in the name of The War on Terror. This book simply isn't it though.
Posted by david elzey at 8:38 AM