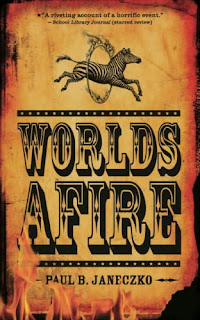 by Paul B. Janeczko
Candlewick 2004

A circus tent. A catastrophic fire. The voices of those who were there, victim and witness, their stories in verse.

On the afternoon of July 6, 1944 a fire broke out at the Ringling Brother's Circus while in performance in Hartford, Connecticut. The tent canvas had been waterproofed with paraffin and gasoline, a combination that turned the entire circus effectively into "one huge candle / just waiting for a light." No one knows how it began but once the tent caught fire it was only a matter of moments before it was engulfed in flame. 500 were injured and 167 people died, and Janeczko has chosen to let the voices of the people involved tell the story from their own perspective.

Janeczko leaves it up to the reader to pick up the clues within each poem to guess who survived. The poems are separated by three parts, or acts if you will. Part 1 gives us what people were thinking and doing just before the circus. Some were excited kids, some were circus performers getting everything ready, and piece by piece, line by line, we get little details that anticipate the disaster to come. Part 2 deals with the disaster itself. What it was like to be dealing with large cats when the fire broke out and people were running everywhere. What it looked like from under the bleachers by a kid who was collecting the change that fell out of people's pockets, how he was able to cut a hole in the side of the tent with a pocket knife and escape. Part 3 covers the sober aftermath as survivors and townspeople come to grips with the horror. A soldier anxious for active duty overseas finds working morgue detail more gruesome than the war he is about to head into.

With an economy of image and detail Janeczko delivers a portrait as alluring and ephemeral as a flickering flame.  There's a very Spoon River Anthology feel to the book, with its ghostly echoes of people from the past reliving a single day – a single, horrific day – in the gentle breeze of a summer day that changed, defined, or took their lives.
Posted by david elzey at 8:24 PM