Atomic Ace and the Robot Rampage 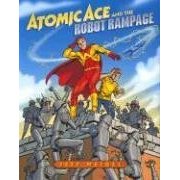 Superhero Atomic Ace is called by NASA to break up a threatening meteor shower headed for Earth. Meanwhile, arch nemesis Roboconqueror is released from prison and sets out to destroy Atomic Ace. Using his mechanized robot army, Roboconqueror hones in on Atomic Ace's nuclear aura little realizing he's actually tracking Ace's son! When dad realizes the danger he races back to Earth, but is there another family member with enough superpower to defeat the robot army and save the day? Could it even be... mom, a retired superhero herself?

This rhyming picture book has the unique feature of running parallel story lines by telling Atomic Ace's story as panels culled from a comic book while the Earth-bound adventures fill the page with digitally-colored illustrations. Having two stories -- or even two illustration styles -- side by side isn't revolutionary, but they do have the advantage of supplying tension to there story which might not be there otherwise. As with all superhero stories, the peril is directly proportionate to what the hero (or heroes in this case) are capable of and in the end evil loses and justice prevails.

I don't get the current interest in superheroes. As I understand it, the appeal in good versus evil stories (and crimefighting in general) is that people like the idea of sympathizing with the bad guys until they go too far, then go looking for the "release" of this tension through the last-minute actions of the hero. If people aren't invested in the bad guys -- through personality, actions or ideology -- then no salvation from any hero is going to be satisfactory.

Every era has it's ideological heroes. During prohibition and through the 1930's people enjoyed gangster films because what they were involved with -- gambling, liquor, vice -- appealed on one level which allowed for those "baser" instincts to be expunged either through getting caught or going down in flames. Think "Top of the world, ma!" as Jimmy Cagney would rather blow himself up (symbolically sending himself through fiery damnation) than get caught and you can capture an audience in a sigh of relief knowing that justice has prevailed. Westerns took over as the law and the lawless squared off in lands where borders and territories where physical, emotional and philosophical. The science fiction that filled pop culture in the 1950's spoke to the cold war fears and the idea of nuclear attack and communist invasion played itself out against a backdrop of nuclear heroes (and villains) and the idea that political might makes right.

Out of this grows a comic boom culture that had been steeped since the late 1930 but doesn't come into its own until post-war Americans go looking for a new breed of hero -- the super hero -- to help address problems and issues that far outstrip the abilities or mortal men and governments. Despite their alien powers or advanced gadgetry the stories are little more than adaptations of the good versus evil scenarios. All that has changed is a growing angst that the evil has grown beyond the powers of individuals to conquer.

So what does it say to us now to have these superheroes step once again to the fore? Have we grown so uncomfortable with our faith that humankind can settle our differences and meet the world's challenges head-on? Do these superheroes represent our need to feel some fleeting sense of power over the powerlessness in our lives? Are we merely abdicating our personal responsibilities for the evils we see by suggesting that only super human beings are capable of righting such wrongs?

And what are we telling kids when we present them with picture books featuring a superhero dad on his way to work (for a government agency, no less) while former superhero mom stays home to go shopping and pick up the laundry? Are we finally resigned to the notion that even superhero families cannot manage to have two working adults and that life for superheroes is no different than any other family? Ah! But if that's the case, why do we need this lesson from superheroes at all? Moms and dads used to be heroes for everyday, mundane things like fixing a bike or saving the family pet. Now, nothing less than saving their child from a robot army will do for sending the message home to kids.

At the end of Atomic Ace there is a little update on the situation at home where parts of the robot army are salvaged and converted into domestics so that superhero mom can return to crimefighting. It's almost touching how there's a token nod to feminism at the end, like something lifted from even the most square Marvel or DC comic book of the 1970's. Warms the heart.

Now if they can only get a book out there to explain to kids why, in a superhero world, we still have war...
Posted by david elzey at 11:23 AM