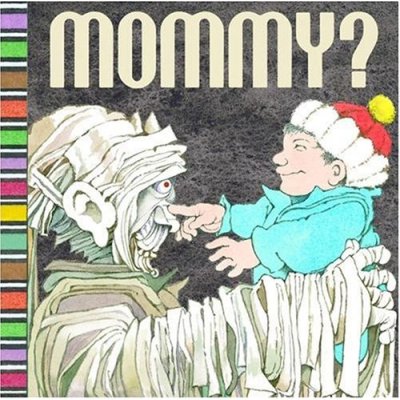 This book makes me feel like shouting "but the Emperor is naked!"

There's this sense I'm getting that this is the pop-up book by Maurice Sendak that people have long been waiting for. Finally, the master and elder statesman of modern children's picture books has graced us with a masterpieces, where the art of paper engineering has finally caught up with the energy and spirit of the man's illustrations.

It would have been both the most natural thing in the world and the greatest folly to have had Sendak make a pop-up of Max and his beasts from Where the Wild Things Are; Natural in that Sendak's pages tend to spring from the page in their wild rumpusing, and folly in that the effect of Max and his fantasy world would have been overshadowed by the various cuts of paper dancing before our eyes.

The "scenario" is that a little boy -- suspiciously looking like Mickey, escaped from the Night Kitchen -- wanders wordlessly through a castle searching among the collected monsters for his mommy. Frankenstein is here, as is the mummy and the whole host of classic monsters from the old Universal Studios movies. Mickey-boy is fearless as he scares and pranks the monsters. Finally the Bride of Frankenstein appears, beckoning her child into her loving, creepy arms. 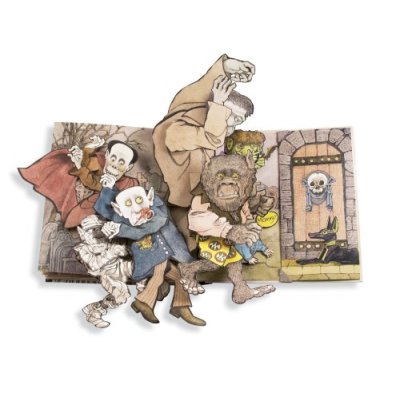 Sendak gets it all right, but it still looks wrong. The flailing arms, the twisting heads... it's like news anchors giving you the days top stories as interpretive dance.

Over the past half-dozen years or so as Robert Sabuda and Matthew Reinhart have been producing these modern marvels of dancing cardboard I have come to question just who, exactly, are these books intended for? A child young enough to enjoy the pop-up version of Alice in Wonderland may ooh and aah over the deck of cards exploding from the pages but will just as likely maul the book within a week of it's ownership. Older children who would marvel at the process required to create such animata would find the text dull and would tire of the book after a single viewing.

I'm going to go out on a limb here and suggest that all these recent children's books are not intended for children at all; they're intended to impress adults who believe these are things children (especially children they do not know well) would enjoy, intended for well-meaning grandparents looking for something "special" believing it will become a keepsake for the child, intended to make money with a clever concept and flashy presentation. Many a practical parent knows that a book with moving parts does not survive intact very long. I can't imagine the public libraries keep many of these stocked.

I imagine diehard fans of Sendak (including the New York Times) will keep sales of this book -- and other pop-ups -- flush through the holidays and the coming years. Ultimately these books are destined to become collectors items. Those wise enough to keep them in their protective plastic envelopes and wrapped in a trunk for twenty years are certain to have rare treasure long after those copies purchased for kids have found their way into the recycling.

And if Mr. Sendak should ever be enticed in the direction of interactive publications, I'd love to see a large box toy theatre a la Edward Gorey filled with goodies from all of his books. Jennie the Dog chasing Rosie through the Night Kitchen. It might sound sacrilegious but the kids would actually play with and enjoy it.
Posted by david elzey at 8:57 PM

Elzey, unrelated, but I just wanted to say happy Thanksgiving. May you have a peaceful day with lots of pie. Thanks for visiting our blog, too.