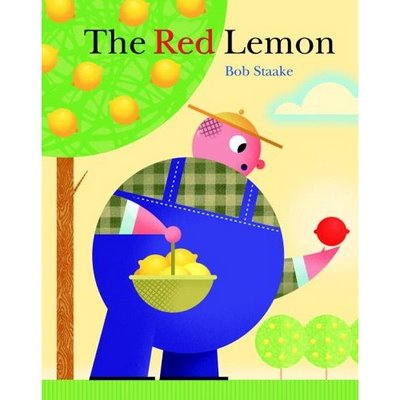 Jolly old Farmer McPhee loves his lemons. There isn't a more perfect fruit in the whole world. Then one day one of his lemon trees pops out a red fruit and enraged Farmer McPhee tosses the offending lemon into the sea.

Years pass. Farmer McPhee and his farm have long since passed but the red lemon he tossed to sea has taken the world by storm. Those red lemons are sweeter and people travel far and wide to the land where the red lemon was allowed to flourish.

This 'Deluxe Golden Book' (this ain't no Shaggy Baggy Elephant, that's for sure) uses bold colors and cool graphic design to tell, essentially, a variant on the idea that things somehow different should be embraced rather than rejected for their uniqueness. Poor, sweet Farmer McPhee can't see beyond his own little world and in casting off the red lemon sets about the chain of events that make his beautiful yellow lemons obsolete.

So all you people out there poo-pooing computer graphics in children's books, this is aimed at you; ignore the sterile computer generated offerings from the graphic artists at your own peril. These books will come back to haunt you as the classics of the future.

Seriously though, I've seen people fall equally to either side of the 'love it' and 'hate it' camps over this book. I find Staake's art both too cold and too sophisticated for children the book is aimed at and the story negligible at best. Give me Green Eggs and Ham any day over red lemonade.
Posted by david elzey at 8:50 PM