The Amazing Life of Birds 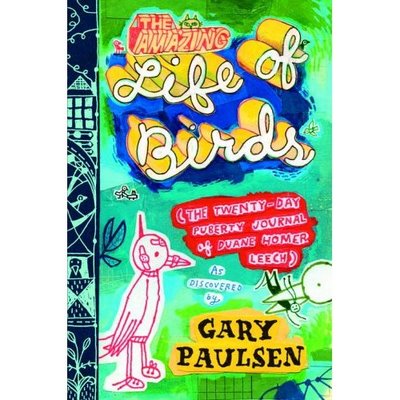 (The Twenty-Day Puberty Journal of Duane Homer Leech)
as discovered by Gary Paulsen
Wendy Lamb Books/Random House 2006
Male puberty in all it's onset glory. The zits. The changing voice. The embarrassment of having to force yourself to think of something because the rest of your body thinks you want sex that instant. The unexplainable attraction to girls. All of it, just as I remembered, and just as I don't remember it, all at once.

Were it not for the construct of the journal it is likely Duane wouldn't remember any of this as well. Filled with moment after moment of harsh human developmental reality, I believe most of us forget these details of the early onset either by choice or design. Living so close to the moment you're sure a major zit or repeated episodes of clumsiness last forever, year upon year, but as the journal points out in a nice but oblique way, what's twenty days in the grand scheme of things?

Unlike most boys going through a pubescent overhaul, few would have the opportunity to watch a hatchling bird on their windowsill go from newborn to adolescent during those same days. As Duane watches and records the baby bird's progress he is treated to an overview (of sorts) of his own life to that point. The early days of constant eating, the parental exasperation of child-rearing, weaning children away from their dependence and, eventually, tossing them from the nest to fly. For the most part Duane sees but does not observe. It isn't until he's taken a fell spills of his own that he understand what his best friend means when he tells Duane that you have to act like you're not surprised by any of it. Sure, you can't go around ignoring the possibility of embarrassing erection in public, but the stammering and other social missteps can easily be shrugged off as just another one of those things everyone goes through.

Paulsen's book is a breezy read, just perfect for a target audience that is, when you think about it, both small and limited. No boy going through puberty is going to want to read about Duane's exploits. No matter how extreme Duane's zits (or mistaken ringworm) are the book would scare the hell out of any kid in the throes of change. Boys that have already passed puberty aren't going to want to look back until they're long out of range, and younger boys might just be confused about just what exactly Duane is talking about when he mentions replacing the word ELBOW in his mind when thoughts of female anatomy suddenly spring forth.

So the book is squarely aimed at the boy within spitting distance of puberty... or, and this might be a little off, perhaps it's aimed at girls. While sex education will lay out the basics of what it means physically to go through puberty it does little to explain what is going on inside the mind. Perhaps this book then makes a better handbook for pubescent girls who are trying to understand things from the other side. Boys aren't likely to hunt down clues about girls -- when they get that interested they jump (or are forced by peer pressure) to the misinformation and misogyny provided by Maxim and FHM magazine -- but for any girl who's curious to know what the flip side of the menstrual equation looks like, this could be a good window into that world.

Not that there's any comparison, mind you.