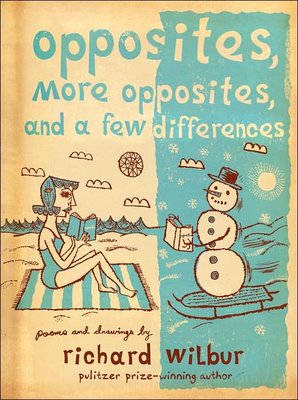 In fifth grade I discovered the Complete Book of Nonsense by Edward Lear and the world changed for me. It was the fattest book I had ever seen in the children's library at my school -- a squat little four-by-six hardcover with a bright yellow cover showing signs of grubby hands and corner drops. Despite being a book of poetry, mostly limericks, it was shelved among the humor books. I was probably looking for a book of jokes and the fattest book in the section looked promising.

I don't recall being surprised that I had stumbled onto a book of poetry, and perhaps I wasn't, but I do recall a certain feeling of having walked into a new door and being bathed in a sort of ethereal delight. These little five-lined poems, one to a page accompanied by an absurd and naive little drawing, sang to me. I don't think I came across the word cadence until high school, but I recognized it instantly in fifth grade.

The limerick is a kid-sized song, the kind that can be repeated over and over (because that's what kids do, that's how they learn to master language) with each of Lear's limericks a story unto itself, a seed for fantasy. Ischia. Rheims. Dargle. El Hums. Did the place names in these limericks really exist or where they the fancy of the poet fitting the rhyme? Did it matter?

Naturally, a discovery this huge required me to strike out on my own, to attempt my hand at the limerick. Inspiration was everywhere: classmates, teachers and school administrators all became citizens of strange lands invented to fit the punchlines of my bold rhymes (and I did see them as punchlines, I was looking for a joke book as you may recall). Just as naturally, when I shared my efforts with friends and led them my source book, my Rosetta Stone, a fad swept like a wildfire in dry Southern California scrub. I'm sure I wasn't the first as I'm sure every teacher at El Marino Elementary had witnessed that particular fad annually. Their bold little fifth grade language explorers had stumbled into the same linguistic jungle and claimed it for their own.

Occasionally I stumble across a book, story or poem whose wordplay catches the same spirit as those fifth grade days. Richard Wilbur's collection of two previously published books (and a few addenda marked as differences) is such a book. Each of the pages contains a poem, numbered as if each described set of opposites was a rule, and a small illustrative naive drawing. The poems themselves adhere to AABBCC rhyme patterns and vary in length. Decidedly not limerick, they are also far more sophisticated in their wordplay but simple enough to be appreciated by a child (or childlike adult) who enjoys letting words dance around the tongue and mouth.

19
Because what's present doesn't last,
The opposite of it is past.
Or if you choose to look ahead,
Future's the opposite instead.
Or look around to see what's here,
And absent things will not appear.
There's one more opposite of present
That's really almost too unpleasant:
It is when someone takes away
Something with which you like to play.

I would like to think that had I discovered the first of these collected poems in the early 1970's that I might have been equally inspired but I suspect I wouldn't have been as successful. Where limericks invite invention opposites demand precision, which runs counter to a lifelong struggle I've had with my own impatience. Still, It is fun to read through page after page of extremely clever examinations of what is essentially the yin and yang of the English language.

2
What is the opposite of flying?
For birds, it would be just not trying.
Perhaps the opposite for us
Would be to take a train or bus.

Lately I've felt that there's too much rhyming text in children's books, bad and unimaginative rhyming text, I should add. Yes, children respond to rhyme for a variety of reasons, the most basic of which is that they have a rhythm, a song, a chime that rings deep in the brain. But aside from that does the rhyming do more than entertain? I don't mean in the pedagogic sense -- I'm sure there are studies showing that rhyming text yields better readers, develops cognitive skills, &c. -- but is a book in rhyme an easier sell, to a publisher, to a parent, to a child devouring books?

My general feeling is that too often I find rhymed text that does little but sit limp on the page, perhaps dulling the senses of children who will grow up thinking that all poetry is rhyme, all rhyme is stagnant, and life's too short for stagnant reading. Clever rhyming poetry hardly seems to rhyme at all, the sonic parity is merely the icing on the cake; there isn't any sense in icing Brussels sprouts, which to my mind are the opposite of cake and about as unpleasant as poetry with forced rhyme and no soul.

No, I don't expect every poet writing for children to be a Pulitzer Prize-winning former U.S. poet laureate, as Richard Wilbur is, but I would hope that they don't suck all the fun and joy out of reading through mediocrity.