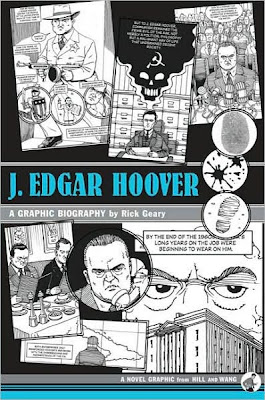 A Graphic Biography
by Rick Geary
Hill and Wang 2008

Just what the world was waiting for, the life of J. Edgar Hoover as a graphic novel. Actually, in a way, I was. Sort of. I mean, I think there any number of political and cultural figures from the 20th century who could use some better coverage than might appeal to a younger audience.

Geary in many ways is a perfect choice for Hoover. His mannered crosshatch style almost bespeaks a certain Victoriana that suits the man who built and ran the FBI for over 50 years. Using almost no dialog but plenty of narrative text, he recounts Hoover's rise and fall with carefully staged scenes and expressions. The effect is almost like a Ken Burns documentary in graphic novel format, which isn't a bad thing. You can practically hear the period music as the narration methodically connects the dots in Hoover's life, from his low days as an average government worker to one of the most powerful unelected figures in American politics.

I joked with friends that I was a little upset that Geary stayed clear of gossip and rumor -- though there is a single panel suggesting what Hoover looked like if the rumor of his attending a party in drag was true -- there is also only the lightest gloss on his one man war against those he felt were his and the nation's enemies. In some ways, the chapter on the Kennedy's could be a book unto itself, as could the chapter on his secret surveillance war on MLK and John Lennon, but these events are passed over and given none of he weight I personally felt they deserved.

I also worry that a reader getting all their information on Hoover from this book might not fully understand that he wasn't really all that good for the country. If that sounds a little biased then it balances the book's non-committal position of Hoover as a politically neutral man who ran his office with an iron fist. he ran more than his office with that fist, and ruined a great many lives, and none of that comes through.

I love Geary's work in general, and hope he does more of these books in Hill and Wang's series of biographical graphic novels.
Posted by david elzey at 5:05 AM

Just discovered your site this morning. Couldn't help but tell you smart I think it is.