all the wrong people have self-esteem 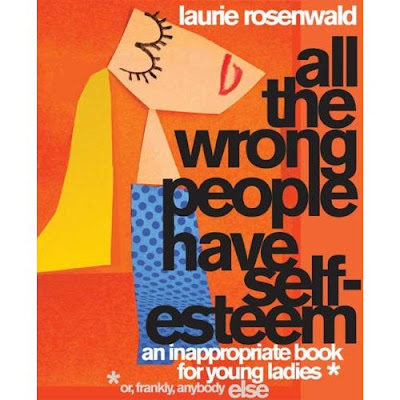 an inappropriate book for young ladies*
(*or, frankly, anybody else)
by laurie rosenwald
bloomsbury 2008

when rosenwald's first book came out, and to name but just a few: RED YELLOW GREEN BLUE, i snatched it up because i had this funny feeling it wouldn't be around long. her picture book of colors, made of jaunty rhymes and bold collage graphics, was a feast for those hip to, well, bold graphics. but it wasn't exactly kid-friendly. granted, there were parents who didn't feel their children required fluffy bunnies and simplified illustrations with big bold print to teach them their hues of blues and millions of vermilions, but beyond the occasional stocking at some modern art museum gift shops, this was a tough sell.

then back i january i saw rosewald's new book on the counter of a book store half way across the room and knew i'd want it. i didn't even care about what was inside (though later i did) and merely flipped through the book quickly to get a sense of it.

whoa. this is no picture book. oh, no, this is no free to be you and me. no, this is about dealing with angst. tween and teen angst. girlie angst, with a dash of empowerment and a dip of the playfully absurd, but still very much angsty.

there's a lot of potential for pissing off adults in this book. playing against her bold graphics, rosenwald tosses out observations, confessions, examinations, and exercises designed to challenge and confront the complacency in the world young girls (and boys) find themselves in. the two page spread on "where babies really come from" probably won't surprise as many teens as it would the parents of those teens who would prefer to believe their children are still to young to hear these things. the various elements that challenge body image, well, we could certainly use more of those, and the anecdotes like the one about getting kicked out of yoga class are certain to sound familiar to anyone who has found the seriousness of some situations to be ridiculous. but occasionally rosenwald kicks out a little rant that borders on intolerance, which seems at odds with her intent. like the tear she goes on against those self-identifying as victims of peanut allergies. i'm going to give her points for bringing up a topic that i think has much deeper roots -- environmental illnesses that are only treated as symptoms without ever divining the cause -- and for taking on the victim mentality, but to suggest that people with peanut allergies should either "die or, you know, whatever. deal with it." misses an opportunity to make a reasoned case about the real problems. in some ways her approach mirrors the ill-formed thought processes of teens who in their own arrogant ways believe they understand the world as few others can -- a sort of my-way-or-you're-an-ignoramus kind of world view.

all the wrong people have self-esteem is brash and brassy, a book that's not afraid to stick its neck out, and the kind of book that would be right for certain teens. i'm just afraid that the teens this book would appeal to either don't have self-esteem problems or would find the confrontational nature of some sections of the book off-putting. an interesting experiment that succeeds as much as it fails.
Posted by david elzey at 5:24 AM

I'm so glad you reviewed this one! I ordered it as soon as I heard about it and love it. However, I wasn't quite sure of the audience either. Brash and brassy are great descriptors.