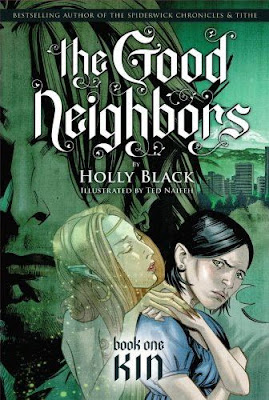 The set-up for this graphic novel is about as generic as you an get: mopey teenage Rue's mother has disappeared and her father is suspected of murder. Of course, like every teen novel where a parent is accused of murder, the teenage protagonist knows it can't be so, and in searching out the truth that other inept adults cannot fathom (and adults always have to be clueless for this type of story to work) discovers a family truth, a secret buried and kept from our teen hero who is coming to terms with who they are in the world.

Now, since this is author Holly Black's world that hidden element needs to be something a little more... fantastical, shall we say? So the truth is that Rue's mother is a faerie, and her disappearance has to do with a betrayal by her father that has sent her back into the faerie realm. Rue now has to navigate finding her place in two worlds, and all sorts of mortal and immortal conflicts must be quelled. Eventually.

I don't think I can say flat out that fantasy is not my thing, but I can say that I'm a little tired of vampires (or vampyres), and this reminds me of nothing less than a vampire story swapped out with faeries (or fairies). I suppose there are those deeply invested in the milieu who will berate me for failing to appreciate the subtleties between these two worlds, but here all I can see is another story of "otherness" that pits a halfling between parallel worlds. With the waning of vampires (who took over when interest in boy wizards dropped off) we're seeing the crest of other fantasy elements vying to take over, and faeries are going to have it out with zombies in the very near future of YA literature. I suspect the unicorn contingent (and I mean brutish, violent unicorns, not those My Pretty Pony poseurs) will no doubt follow.

Personal preference aside, I never cared for Rue, never felt like I could relate to her. Maybe it was a double-blind on my part -- a brooding girl AND a faerie halfling -- but whatever, Black never gave me a well rounded portrait of a character I could latch onto. I didn't buy the handling of the murder, or her father's arrest, or their family "friend" who may be at the root of why Rue's mother disappeared. Never mind Rue's ability to go unseen and the fact that her invisibility and disappearance seems to go unnoticed by others around her, or that her friends are flatter than the pages they're drawn on.

Visually, the illustrations felt stiff. It's something I'm noticing more and more, perhaps it's always been there and I'm just now seeing it, but it feels like graphic novels aimed at teens are drawn in a very lifeless way. I find myself looking for the traditional action lines in the characters and the compositions, something that givens them life. A still from a Bugs Bunny cartoon is more expressive, and in the end with graphic novels aren't visuals half your story? If you want a reader (okay, me) to buy into a fantasy world you're going to have to convince me that it's something more that shrouded bunches of trees and creeping ivy. It has to live and breath under its own rules, but it has to express some sort of movement. Even the cheap-o animation of the 1950s had some of the best and expressive backgrounds created in the history of cartoons. You can't tell me it's impossible to achieve the same effects in a black and white graphic novel fifty years later.

Oh yeah, this book lingers in the back of my throat like acid reflux.

As this was one of the finalists for the Cybils in the YA graphic novel category I felt like I really had to make sure I put all these emotional responses at bay and come to terms with whether or not I felt it best represented what was available this past year. The most compelling reason I felt it didn't deserve the win was that the story really is only the first part of a larger story. Too many untied threads, to much left up in the air, ultimately not a stand-alone title. It's unfortunate that every year series titles are pushed through the Cybils because invariably the consensus is that they don't hold up against stand-alone titles and take up space in the final panel that could really make for more of a contest and less a process of elimination.

In the end it hardly mattered, the judges were near unanimous in their decision on Emiko Superstar.
Posted by david elzey at 4:05 AM

Except for the fact that I thought the artwork was at least "pretty," I have to say I'm with you on this one.

Regarding what I call "serial" books--portions of a multi-volume serial that are not complete novels by themselves--being nominated for awards: I just don't know how anyone can even begin to judge the individual portions of a serial within a traditional book award. I believe part of what you judge a novel for is the quality of the plot and the expression of theme. With these serial bits, you don't have a completed plot so you can't make a judgment about the quality. Without a complete storyline, the theme may not be completely expressed. Are they novels at all? Or am I too obsessed with definitions?

I can accept the value of an overall serial. But if you believe that a story needs three or more books to complete it, than I think that you have to also accept that the individual books that make up the serial are incomplete works by themselves.

I'd like to hear from someone who doesn't agree. They have to be out there - the nominated the book and sent it into the final round!

But seriously, in talking with people casually about this, I have yet to find anyone who is able to make a case for serial titles being judged on an individual basis. And I can't help wonder what got pushed out byt these serial titles. It cannot be the case that even a partial story was better than complete stories from all the nominated ones. Personally, I would have loved to see Prince of Persia in this recent mix; I was feeling like we didn't really have much to offer male readers. I know that's not a consideration for final judging, but I'm just saying...

This is just a side comment more than anything else, but if someone could please start a blog called The Unicorn Contingent, I'd be delighted.

I'd check with Holly Black, Fuse. Maybe Mikki Knudsen, I understand she's sympathetic to the cause. Maybe someone can come up with Pride and Prejudice and Unicorns as a rejoinder as well.