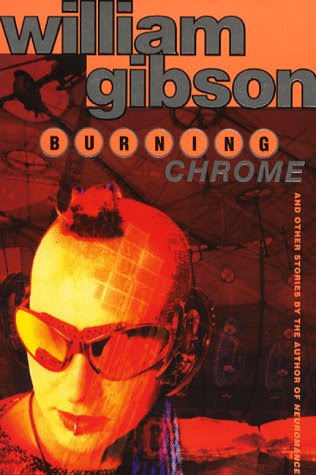 and other stories
by William Gibson
various editions since 1986

A classic collection of sci-fi stories by the writer who invented the term cyberspace and probably did more to shape what our vision of the future looks like in movies than most people realize.

Though technically not a book written for children, I am including it here because I think it's a solid read for teens, and have a review for it up at Guys Lit Wire specifically for that purpose.  I thought rather than cross posting reviews I'd take this moment to talk a little more about the problem of sci-fi in children's writing.  Specifically to ask why there isn't more of it.

As genres go, there are plenty of detective mysteries in children's literature, and books about interpersonal relations between boys and girls to qualify as romance, and certainly enough fantasy to fit any young reader's interest in things from wizards to mermaids to magic.  But where are the stories that speak of the future, a future that isn't entirely a dystopic nightmare?  Where are the stories that look at the problems of artificial intelligence, that propose difficult solutions to our current problems, allegories and cautionary tales, stories about ideas kids can latch onto?

I think we sell younger readers short by not providing them with these stories and having to send them to the adult shelves to find what they're looking for.

And they are looking for them.  If books like The City of Ember and life as we knew it and The Hunger Games and The Adoration of Jenna Fox and Unwound have taught us anything it's that kids really like talking about the issues these books bring up.  And this is what science fiction does well, it brings up social issues in settings that allow the reader to perhaps see them for the first time and challenge the thinks they think they know or feel.

Perhaps the fear in providing younger readers with science fiction is that they will take the wrong lessons from it, misinterpret the message in a way that binds and blinds.  It was only recently that Ray Bradbury acknowledged that for years people have taken the wrong messages from Fahrenheit 451, that it's not (as its taught in high schools) about censorship, or a reaction to the McCarthyism of the 1950s, but a cautionary tale about the dangers of television destroying the interest in reading.  But even as we misread Bradbury's intent the fact remains that the literature provides a point of contemplation, so I'm not sure the excuse holds up as a reason for a dearth of science fiction for children.

Is the problem Science-based fiction?

Have we become a society that fears to discuss speculative ideas based on science and technology for fear of an anti-science backlash?  Has science fiction become the Dalits of children's literature, or been smeared with the taint of the creationist-evolutionist battles? My hope is that we can hold back on the aliens, on the life-in-space stories, on all the external elements that get shoved into science fiction for kids, and instead seek out more stories about who we are as a species and where we are headed, or might be headed, down the road.
Posted by david elzey at 8:51 AM

I think for a while now science fiction in children's literature has portrayed science as bad and scientists as bad guys. Apocalyptic stories, of which there are so many in YA, almost always deal with society falling because of some manmade/technological/scientic mistake. Bradbury's explanation of Fahrenheit 451 as being a cautionary tale about TV is a case in point--technology, brought to us by science, is bad. (Btw, I think TV was viewed as a threat by a number of scifi writers in the late 50s and early 60s.)

I think if kids read much of this stuff they recognize it as cliched. Even the negativity becomes a cliche. Even the thought-provoking aspects of such stories become a cliche.

I think kids would actually like more aliens and life-in-space stories--the gee-whiz magical element of speculative science-based fiction. Yeah, why isn't there more of that? Why do the adult gatekeepers think kids won't read it?