The Adventures of Ook and Gluk 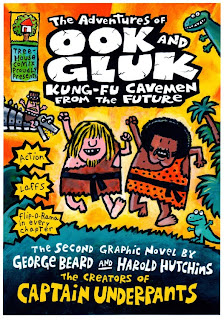 Those bad boys of hypnotic mischief are back (finally!) with an epic 175 page tale of time-traveling cavemen who learn kung-fu and save the planet, both then and in the future.  Really, do you need to know anything more?

While many have looked forward to the third book in another series this summer -- something about games of hunger, or something -- this is the book I've been looking forward to.  And for no other reason that it's about dang time Dav Pilkey put out another book.  What's it been, four or five years now?  Imagine if you FOK-ers (Friends of Katniss, what did you think I meant?) had to wait four years for another installment instead of a single year.

So Ook and Gluk.  They're cavemen.  They get into mischief just like their creators, George and Harold, the two boys who created Captain Underpants, who is in fact their school principal under hypnosis.  Never mind that story, it doesn't come into play here.  Instead we have a couple of cave boys who run afoul a dude that looks like a cross between a tiki god and a salt shaker named Big Chief Goppernopper.  One thing leads to another, Goppernopper has his goons out to destroy the boys, and so on and son on, until one day Goppernopper comes across some guys in heavy machinery clearing whole forests.  Turns out that a Gopernopper of the future has depleted the planet's resources hundreds of thousands of years in the future and has come back through time to steal the resources available from the past.  Bada boom, bada bing, the boys are fugitives and wind up stuck in the future until they can think up a way to go back and save the past.  Luck has them hook up with a kung-fu master who teaches them the martial arts and how to not use violence to solve their problems...

Look, naturally everything turns out okay in the end.  This isn't a ride you get on for the scenery, or the flowery language (though sensei Wong gives the boys a bit of wax-on wax-off style philosophy), this is a book you gobble up for fun, and then start over from the beginning because there isn't anything else to read.  Not like this.  This is the long-form graphic novel that third grade (and some WAY older) boys have been waiting for, and it comes as a perfect late-summer respite to required summer reading.

Granted, we are talking about the type of antics seen in countless cartoons on television, the one-dimensional bad guys, the simple chase scenes, but how different is this really from any other genre reading out there?  It's got drawings, and puns, misspelled words and crazy flip-o-rama animation at the end of every chapter.  It's got cavemen and robots and time machines and kung-fu.  It's got boys behaving like boys and, believe it or not, a bit of romance and puberty thrown in for good measure. Sure, there's a problem with the time travel continuum and the messing with events thing, and I'll bet there are still parents and teachers and librarians out there who find these comic adventures inane and loathsome.