The Boy Who Could Enter Paintings 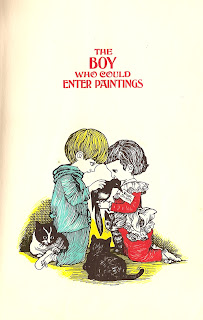 A boy discovers he can literally jump into paintings and interact with the people there, but his ability all mysteriously vanishes just as he's about to enter school...

Edward has grown big and strong, and can hop around on a single leg all the time without getting tired.  he spends his cold winter days in his artist-father's studio watching him paint lavish jungle scenes and his studies of famous paintings.  Then one day when his father is making tea Edward hops close to one of the paintings and discovers that he can actually jump into them.

Without telling his father of his new ability, he accompanies his father to the modern art museum when Edward continues to jump into a Goya and a Seurat, interacting with the other children in the paintings who find his appearance curious but, as kids do, accept him without question in their play. 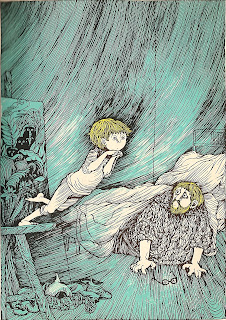 Then a curious thing happens.  Edward's father announces that Edward will soon be entering school and, in an final attempt to hop into his father's painting, takes a giant leap... and crashes through the solid plane of the canvas.  The joy of imagination and carefree childhood gone, his father implores him to stop hopping around, and like a good boy he stops hopping, leaving his innocence behind.

Wow.  Talk about a harsh lesson in conformity!

I came to this book because of the illustrator, Susan Perl.  During my childhood she was known to me primarily as the illustrator to a bunch of magazine ads for Health-tex clothing.  The ads centered around the kinds of questions kids ask – "Why is the sky blue?" "Why are some people fat and some people skinny?" – with straightforward answers that kids could understand, a fairly clever campaign for showing how a clothing company "gets" what kids are about.  Too bad one of those questions wasn't "What happens when a book tries to take away my childhood innocence?" 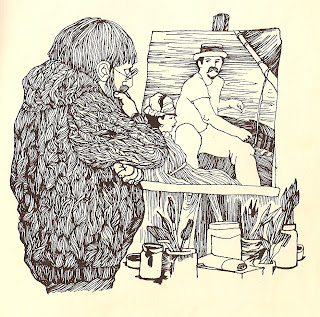 Perl's style is probably best described as textural, in that she uses the same width of line to outline and contour as well shade.  They are like a cross between woodcuts and felt tipped pen illustrations and have an odd warmth to them.  Sometimes when I see her work I imagine this is what the children of an Edward Gorey drawing and a Mercer Mayer drawing would look like, if illustrations could mate and reproduce.

As for the story, I have a hard time understanding what people were thinking about children's books in the 60s sometimes.  Was this meant to be read to younger readers as a story of comfort that childhood ends at the dawn of school, and that it's perfectly natural to "grow up" out of thinking you can hop around all day and into works of art?  Or was this intended for an emerging reader with a longing for the "simpler days" of their pre-school days, having now learned to read and wishing they were back in those days when one could simply escape into a painting?  I can't tell if this is a cynical message written by an artist about the dangers of compromising one's dreams or a celebration of childhood whimsy.

I think this is one of those situations where the illustrations outclass the original story.
Posted by david elzey at 9:04 AM

I've read this story a number of times since I was a child and have recently read it again tonight to my 3 year old daughter. My impression of his losing his ability to enter the paintings centered more around the fact the a new boy moved into the loft and he finally had a friend, thereby no longer needing his special ability.

that's an interesting observation, and perhaps that was part of the intended message to adults, but specific mention is made of edward getting ready to begin public education which precipitates the change. given the number of books dedicated to dealing with the anxieties of children going to school for the first time, and the general weirdness i find in stories from the late 60s and early 70s, i'm going to stick with my interpretation.

I always enjoy your comments on Poetry Friday posts and came here to browse around, as I sometimes do. I wasn't disappointed, especially in recognizing Susan Perl from those HealthTex ads. And I'm tickled by the idea of illustrations mating and reproducing. I'm sure that books are doing it too, in the library stacks when the lights are out. And then there are some pairs that strike me as "separated at birth," like--well, I can't think of an example now (damn this middle-aged brain) but you know what I mean.

See you around the kidlitosphere.

indeed, heidi, who knows what goes on with the books when the library is closed. i thik my town library, in an effort to keep cavorting at a minimum, designed a library with lots of windows so the books would always stay on their best behavior, but like crafty teens i'm sure the books have found a way to party with out our knowing.

thanks for poking around!