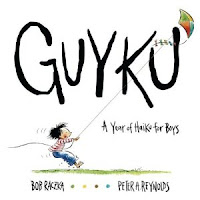 Haiku for and about boys, organized by seasons, full of the sort of things boys do. But not for haiku purists or people who want boys to really understand what haiku are really about.

Full of observations of what it means to be a boy, full of mischief and the occasional moment of tenderness, Guyku is a collection of poems that promises more than it delivers.  And, yes, what ruins it for me is the haiku itself.

As Raczka notes at the end of the book, haiku "is a wonderful form of poetry for guys like us" because it's an observation of nature, the poems are short, and they don't take long to read.  All well and true, even the note that "a good haiku can pack a punch," but here's the thing: these aren't good haiku, not many of them at least.

Man, that sounds harsh, but the thing that makes a haiku is exactly that punch, the observation that takes everything else in the poem and sharpens the observation.  And punch is the word, because the summary observation in a haiku should come as a sort of a punchline at the end.  Or at the beginning, as a statement followed by a sort of sideways definition.  A good haiku isn't simply just ramming a scene into a 5-7-5 format and calling it profound because it fits, there has to be that break, that breath, that moment where the observation is observed.  Here is a guyku taken from the "Fall" section:


Pounding fat cattails
on a park bench near the pond,
we make a snowstorm.

It's a nice image, and one that is total "boy" in that it takes nature, finds a way to make it an amusement and creates another nature image, turning fall into an artificial winter.  It even has a comma that breaks the action from the observation at the end, but it's missing the true punch of that image, almost as if it were an afterthought and not the poets intentional focus.  As always, I have to resist the temptation to tell the author (and you, the potential reader) how it "should" have been written, but I can think of three or four different ways the emphasis could be shifted to give that snowstorm image more weight, make it stronger.  Flabby writing is what it is to my ear, and it kills my ability to enjoy what the book has set out to accomplish.


If this puddle could
talk, I think it would tell me
to splash my sister.

Again, a great boy moment – that temptation to do something naughty and the interaction with nature – and yet so much more could be done with it in haiku.  The puddle could talk, the boy could hear the puddle and debate the appropriate behavior, and all with the same outcome but with more punch.

I've also been seeing the same problem recently with people writing in the "limerick style" while at the same time ignoring the conventions of the form, thinking a A-A-B-B-A rhyme scheme is all that's necessary.  As with some haiku, the limerick contains a "twist" ending that serves as a punchline to everything that comes before.  I think it's perfectly fine if you want to write five lines, or three lines, or if you want to follow certain poetic formats, but one should be careful calling a poem a limerick or a haiku when, in fact, they are approximations of form.

So as much as I wanted to really like the concept of Guyku I have a hard time with telling young readers that all it takes is seventeen syllables in three lines of observation about nature.  I think as a basis for teaching the form it is fine to let kids play with the basic format, but in writing for young readers we owe it to them to showcase not only the form but what is possible when done correctly.
Posted by david elzey at 9:03 AM