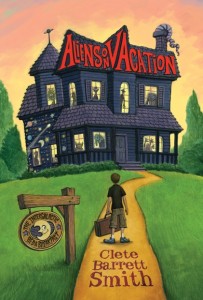 When Scrub is shunted off to his Grandmother's for the summer he discovers that her Intergalactic Bed and Breakfast is more than a name...

Scrub just knows his summer is going to suck. Having to spend his summer helping his grandmother run her Star Wars hippie-decor B&B in the middle-of-nowhere Washington was bad enough, but knowing that his best friend Tyler was going to be doing basketball camp and tournaments across the country was killing him.  There is no way Scrub would ever make the seventh grade all-star team next year, not with Tyler gaining the coach's favor three times a week in practice and in games on the weekend. But with his parents called off on last-minute business trips, and no way to convince them he could take care of himself at home alone, there is little Scrub can do but suck it up and stick it out the best he can.

Initially he assumes Grandma's business caters to the sci-fi nerds after meeting with one of the guests, a tall man with loose, ash colored skin.  With a better understanding of the House Rules ("Two arms, two legs, one head" and "No harming the natives" in particular) Scrub begins to realize that "Intergalactic" is more than just a name for Grandma's establishment; she truly is catering to visitors from other planets!  But the resort only works as long as the "guests" can remain unnoticed while on vacation, and it falls to Scrub to help Grandma keep her hostel/travel portal a secret.

Naturally, there are suspicious locals, including Sheriff Tate who is certain that Grandma is up to no good, and Amy who suspects there's a connection between the B&B and life on other planets. And then there's the little issue of the intergalactic transporter shutting down leaving vacationers trapped on Earth. It's only a matter of time before the carefully hidden truth is about be be exposed, right there on the lawn in front of the B&B with world media attention.  But if Scrub saves the day and can protect Grandma and her guests his actions will not only get the Sheriff fired but cause him enough ridicule to force him out of town... taking his daughter (and Scrub's only real friend) Amy with him.  Is there any way Scrub can make the right decision for everyone?

Among all the book's characters I do have a favorite and that's Mr. Harnox, the aforementioned tall guest with ashen skin who happens to be stuck on Earth. Throughout, Mr. Harnox is constantly making discoveries about his new home (a description of cacti sounds delicious) while at the same time applying the lessons Grandma has tried to instill in all her guests, ("Everything deserves a second chance"). Alternately comic relief and an alternate viewpoint on the world, his loopy wide-eyed innocence coupled with his unusual diet creates a character that wouldn't be out of place in a Charles Addams cartoon.

Smith gives readers a solid everykid in Scrub; neither nerdy nor geeky nor uber-hip.  He's just a kid, an easygoing vehicle for dealing with whatever gets thrown his way, which ends up being quite a bit, actually.  There isn't any mystery what Grandma is up to, or that Scrub will figure it out, so much as a question of what is the right thing to do in any given situation, and can Scrub handle it.  What's interesting is how adept Scrub is at his various care-taking duties – helping the aliens prepare to look human before leaving the B&B, shopping for excessive amounts of ammonia and aluminum to keep one long-term guest fed, and even mitigating conversations between the guests and locals to quell suspicions. Scrub finds, as many kids do, that fluid middle space where they are maleable to any given situation and it becomes an empowering thing for a kid to find they are both needed and capable when it comes to being responsible. There's a strong thread of compassion woven throughout though Smith doesn't draw any undue attention toward it.

Which is not to suggest Aliens of Vacation is a dry "message" story.  It's a solid, plot-driven middle grade book with heart that will have readers longing for distant relatives with intergalactic transporters in their homes.

Full disclosure: Clete Barrett Smith and I were students together at the Vermont College of Fine Arts MFA program and I received my copy of the book from his publicist.
Posted by david elzey at 3:59 PM

I have been having trouble getting into this one, so this review is helpful. I'll try to pick it up soon.

Have this one on my ipad. Few more reviews to check out and read, then we start this one. Thanks!

Sounds like a good one for my library. Thanks for bringing my attention to it!