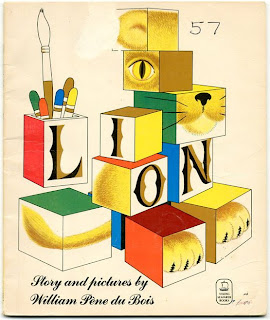 In an animal factory in the sky winged artists invent new animals, including one very unusual looking lion.

Artist Foreman, looking suspiciously like an angel, was one of the first animal designers in the Animal Factory in the sky.  Now in semi-retirement as, well, a foreman to the other artists, he has come up with a new name for an animal -- LION -- and sets about to design an animal to fit the name.  Artist Foreman being a bit rusty designs a multi-colored quadruped with whiskers and a mane of feathers, the tale of a fish, and a variegated striped pattern that defies nature.  Doubting that he has made an animal to match the great name he has given it he goes around to the other animal designers and asks them, in one word, what they think is wrong with the creature.  Size, feathers, color, legs, haircut... each of these responses sends Artist Foreman back to the drawing board to make the necessary adjustments.

Finally he takes his creation to the Chief Designer and asks what is wrong with this marvelous creature and is told "Nothing!"  Ah, but the Chief Designer hasn't heard the proposed noise for the Lion -- PEEP PEEP! -- but his suggestion that a creature like that would make a mighty ROAR leaves Artist Foreman little choice but to accept that a peeping lion would be as wrong as everything else he originally thought about his creature.  So Artist Foreman returned to his drawing board and roared with happiness over his latest creation.


This is one of those time capsule books, something I had totally forgotten I'd read as a small boy.  When I stumbled upon the title on a Caldecott book list (it's an Honor title), and with fond memories of his other books besides The 21 Balloons, I had to hunt it down. My first reaction was What an odd take on the creation stories.  Clearly we are shown a heaven in the clouds, with angels of creation in the service of a god, but what we know of the Biblical creation was that the animals were created by God and not his underlings working in a factory.  Then there's the notion that God merely signs off on these creatures not of his design, and that no one dares contradict him... it all reads like an odd bureaucracy, complete with yes-men and semi-competent foremen whose employees laugh at him behind his back. Though fifty years ahead of its time, the book seems to argue both for and against the idea of Intelligent Design.

Of the mid-century children's book authors and illustrators William Pene Du Bois fits an odd space in my nostalgic heart.  There is a childlike whimsy and logic to his stories and illustrations that, as an adult, don't quite hold up.  At the same time that innocence is oddly in keeping with the way kids think.  The odd fraternity of The Three Policemen, the looney inventions of Lazy Tommy Pumpkinhead, even his original illustrations for Roald Dahl's The Magic Finger all speak to this sense of Du Bois channeling some other world that looks like ours but simply isn't.

In Lion he gives a glimpse of a heaven no one has ever claimed, before or since, with angels working an animal factory, working their way through trial and error.  The story allows the reader (or listener) a chance to recognize everything that is wrong with the Lion and decide for themselves what exactly is wrong with Artist Foreman's creation. Were it not for the wings and the clouds the story could be set anywhere, setting becomes almost incidental from the start. The Animal Factory in the Sky is simply a door through which we are given entry into Du Bois imagination.

I was surprised that a single library in my local system had a copy of this book on hand.  Out of print since 1986, I wonder how often it gets checked out by young readers, and how long before this lone copy ends up discarded and lost to the memory of grown children from another era.
Posted by david elzey at 11:16 AM