The Witch Who Wasn't 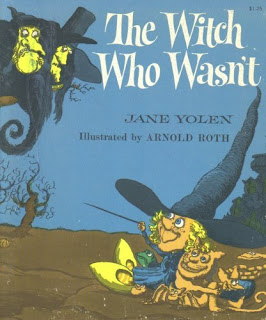 At a convention for witches, sweet young Isabel doesn't think she has what it takes to win the Spelling Bee...

I'll be honest, I checked this out from my library because of Arnold Roth. That and the hope that by checking out the one sole remaining copy of this book in my library system that it might survive another year's weeding.

At 700 years old, Isabel is a young witch (apparently witches only age one year for every one hundred they are alive), and is finally old enough to attend the witch convention. Only she isn't a very good witch when it comes to spells, she simply couldn't create anything evil. Her cauldron smelled of sugar and spice, her attempts to create snakes turned to cakes, bats became cats, and bugs became things one could hug. In short, Isabel was too nice to be a bad witch.

At the Witches' Convention when it came time for the spelling bee while the older, more experienced witches drew spells that conjured up horrible beasties all Isabel could manage was a tiny mouse. This, of course, was the most horrible thing of all, sending all the other witches jumping onto chairs and hiding behind each other until the thing could be taken away. That Isabel was different, and that made her extraordinary.

This is one of those old fashioned picture storybooks, a wordy tale that today would be turned into a book for young readers and not a picture book at all.  Not that the story doesn't lend itself to illustration only that "They" who decide such things have declared that picture book readers no longer have the patience for a book over 500 words (if that). And I'll grant, the story might benefit from some tightening, the character development could use a little more focus, but so what. There is little to the story as it is that feels like it's pushing 50 years old and Roth's illustrations are as delightfully demented as usual.

I understand there was a sequel, Isabel's Noel, but sadly that title seems to have fallen under a bad spell and made to disappear.
Posted by david elzey at 9:37 AM