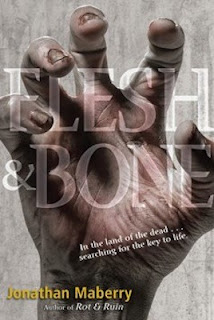 Benny and his friends continue on their quest to find what's left of civilization before the zombies and death cults get to them first. Third in a (seemingly) endless series.

Why is it so hard for writers, agents, editors and publishers to know when a story has gone on too long and jumped the shark?

Long-time readers here at the excelsior file might remember how much I loved the first book in this series, Rot & Ruin. In it I thought Maberry had followed the time-honored tradition of using a known genre to explore some aspect of society, to provide a touch of social commentary among the horror. In that particular book I thought he'd touched on an allegory to our own times with zombies acting as a focus of xenophobic fear. There was a sense of "zombies were people, too" that underscored the ignorance of those who would simply choose to fear outsiders and live a life sheltered from the world at large. I thought Rot & Ruin might stand up over time as the beginning of a truly unique series.

The second book, Dust and Decay, was a little more of a hero's journey, the dark passage where Benny would become the merciful zombie silencer all the while working his way through the wilderness on a path toward finding the origins of a jet he once saw, his hope for a rebuilt civilization. In a sort of mash-up of influences there was a bit of a samurai movie that eventually gave way to a Thunderdome-esque ending that threatened to sink the entire story. There was also a hint of a new religion sprouting up from the decay, an apocalyptic death cult that was possibly more organized than Benny and company ever imagined.

Now comes Flesh and Bone, and in the anti-spoiler alert of the year, Benny and his friends don't end up any closer to finding that jet. Perhaps it was something in me that expected the story to come to some conclusion with this third book but it is so clear half way through (and confirmed in the end) that there is a great battle looming in an as-yet-published fourth book that I started feeling bored. How sad, to have felt such great promise in the beginning only to not really care enough by the end of the third book to even want to read the fourth.

I am not against the notion of epic tales, but when I look at a trilogy like Lord of the Rings and see what was accomplished in three books I tend to question whether lengthy series can actually justify their length. I also begin to wonder of the idea of television series, with their seemingly endless storylines, have conditioned readers to amble along until interest drops and then things get hastily wrapped up. Story arcs have multiplied and become so elastic and I don't always think that it serves the best interest of fiction in the end.

So Benny and Nix and Lilah and Chong continue on, with an army of mutated zombies and a war-hungry death cult and  escaped zoo animals all venturing into the wastelands of North America. If any traces of civilization survived that civil world has clearly been outnumbered by the rot and decay to the point where this reader asks "What's the point?"

But if your taste runs towards a small band of heroes facing off against zoms, Flesh and Bone's got your number.
Posted by david elzey at 10:41 PM

Just an FYI...they actually do find the jet at the end of FLESH & BONE. And they find out where it came from.

so I'm posting mr maberry's comment and letting the review stand as a caution to those fellow reviewers against posting reviews without doing a careful edit before hand.

indeed, they find the jet, the spoiler for me is that they don't find the civilization they long for that I felt was promised.