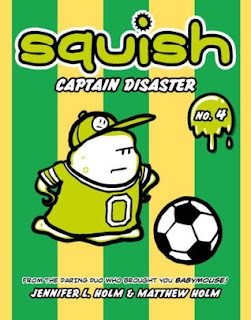 Squish, an amoeba, and his single-cell friends learn life lessons in a primordial soup that looks a lot like an upper elementary school.

As a kid, one of the things I used to love about going out to a restaurant was that the family-friendly places would have comic books for us to read at the table. They were cheesy, with easy-to-solve puzzles and comic adventures that would loosely incorporate the restaurant's mascot and some lesson in good citizenship into eight or twelve pages, the perfect length between ordering and getting food. It was also the perfect length for delivering a didactic message about sharing or bullying or bike safety or recycling or whatever the topic du jour was at the time.

So when I say that Captain Disaster makes me feel like I'm sitting back in a Bob's Big Boy circa 1971 it isn't with a warm and fuzzy glow of nostalgia but with a certain level of puzzlement. Are kids no longer getting these messages in TV cartoons and in other formats that we need them to be produced as graphic novels for a younger readers? Or, conversely, can we not perhaps ask that graphic novels for younger readers elevate themselves above the level of the Archie comics found at the dentist office?

Why does this book make me feel like a snob all of a sudden?

Squish and his friends Pod, also an amoeba, and Peggy, a paramecium, all try out for the soccer team and very quickly learn they don't have any skills. Squish is made team captain and with very little guidance is expected to "steer the ship" of his team forward. While the Coach (a cycloptic crustacean) keeps hammering home the idea of having fun no one on the team is enjoying the fact that they lose every game. Squish's dad suggests that as captain he should try to help take advantage of his teams skills and so he works out a set of winning plays that turns his team around. The problem is that Squish somehow manages to miss the fact that he is always the one to score and Pod and Peggy want to quit the team over it. Realizing that he's focused on winning over inclusion Squish turns things around and returns to the team having fun despite losing.  There's a handful of biology terms thrown in occasionally, not enough to build a curriculum around, with a simple physics experiments at the end and a draw-the character page... all of which brings me right back to those restaurant comics.

Maybe it was the times, and the times they are always a-changin', but it seemed like we got comics like this everywhere we went. At the dentist office, sure, in comics and magazines like Highlights and Boy's Life; No trip to a national park was complete without some comic lesson about forest fires or steering clear of bears; Police and firemen would come to classes to teach us bike safety or the dangers of chemicals or electricity, all with cartoon pamphlets; And there were always fairs with kid-friendly material about recycling or public safety or any number of other civic lessons. I guess what I'm trying to say is, this stuff was everywhere, and it was free, and I'm wondering if we really need more of this stuff, stuff like Squish.

Regular reader know I am a very big advocate of graphic novels for kids, and like anything that includes art there is always a question hanging in the air about how one can discuss something like illustrated stories which many seem to think comes down to a question of personal taste. But as I've said before, the rules for graphic novels and comics for kids are the same as narrative text: are the characters multi-dimensional, is the story emotionally complex, are the secondary characters and plots clearly drawn and equally compelling? Time and again when I come across a graphic novel I find weak, and people question my assessment (usually because they disagree with it), I simply say "If this story had its pictures removed and were told as a traditional story, would you find it of a quality you'd be comfortable calling "good storytelling" for kids?

Quite often the answer is "no," and suddenly the question surrounding the value of graphic novels rears its head again.

Squish is not by far the worst offender in this sense, but when I see glowing testimonials from The New York Times, Kirkus, Publisher's Weekly, and The Bulletin of the Center for Children's Studies I can't help wondering when someone's going to realize the emperor is naked. The problem isn't that these comics shouldn't be made, they simply don't hold up as books that don't deserve the heaps of praise they've received.

You tell me, am I being too hard, or are these graphic "novels" for the younger set filling a need that's no longer being met?
Posted by david elzey at 4:20 PM