The Periodic Table: Elements With Style 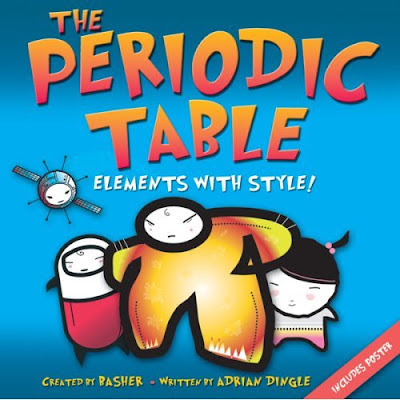 Can the periodic table of elements be fun? And hip?

I found this book strangely compelling. I don't get to say that enough about books these days. Inside this compact little book are over 50 of the elements from the periodic table, that nifty little chart you probably haven't thought much about since high school unless you work in the sciences. Each of the elements gets it's own page and a little first-person bio about its characteristics.

That's right, the elements get their own say and they're quite an interesting collection of characters. And it comes with it's own poster of the elements attached to the inside cover!

The book opens with a brief explanation on the history and organization of the periodic table then jumps in and introduces the reader to the elements by their groupings (carbon elements, noble gasses, &c.). Then each element gets their say in little social networking style "about me" statements accompanied by stats like their symbol, color, atomic number, weight, density, melting and boiling points, and date of discovery. Here's the opening for a fellow you might think you know well:

Some think of me as the devil in disguise because I'm often mistaken for copper. My name is taken from the German word kupfernickel, meaning 'devil's copper'.

Did you recognize Nickel from his introduction?

What could easily fall apart under the weight of being either too cute or too clever the characteristics for each of the elements is well handled by Adrian Dingle, a chemistry teacher who came to the project after the art was created. I think that's part of what makes this book feel quirky; It began as a project by Simon Basher, a British designer who re-imagined the periodic table as a chart of monsters and creatures and ghoulies with individual characteristics that feel like a mashup of grafitti culture, hip-hop, manga, and digital pets. Then Dingle was brought in to make the link between art and science with an eye toward a young readership.

This isn't the kind of book one purchases to just have around the house, it really is more of a reference book best used in schools, but the fun of it almost justifies shelf space in the home. If this had been available to me when I was in middle school I might have done better in the sciences. In fact, I think all of our science and math texts in this country could do with this kind of an overhaul. We've been hearing for almost ten years that the US trails in Math and Science but we aren't likely to change that until kids get more interested.

I'm hoping more books like this help.
Posted by david elzey at 9:12 PM