Funny how memory is. I can see these images as part of my childhood vividly like they happened a few years ago, but I have to remind my kids that I first encountered Pippi back in the days before there were DVD's, before videos, and in this case even before my family owned a color television. In that blue-green cathode haze Pippi held a strange power that made me watch with my face half turned away in fear. I knew girls like Pippi, girls that could womp a baseball better than I ever would and wouldn't think twice about jumping down an open manhole cover, but they didn't scare me like this.

Because Pippi was the first movie I ever saw dubbed into English.

How and why did they talk like that? Their mouths and the sounds they made didn't sync up and worse; The way they were dubbed, stilted and forced like bad community theatre thespians trying to read Shakespeare into whimsy, had me feeling there was an invisible presence in the room that had turned down the sound and was making up the dialog for all the characters as they went along. And because of all this I never read Pippi Longstocking until I was a full-grown adult and felt I could handle it subject without the fear of those early memories rushing to accost me.

How nice it was to finally get Pippi in her correct form, a spunky and precocious 10 year old with a pet monkey and a horse that lives on the front porch. She lives by her own rules and with total abandon, and can foil crooks just as handily as Homer Price. That adults are dolts and can be outwitted by a wild child like Pippi is cake for a young reader . That Pippi actually doesn't even care about any adult besides her father is the icing. Lindgren -- in a fashion that must be a genre unto itself by now -- originally wrote these tales for her own children. Writing to please children may seem obvious but many who try tend to fail because they impose their adult logic and adult world onto the proceedings. Logic alone is enough to kill a good story. Not that children don't long for and crave logic, because they do, but it's the logic they create that's important. When you think about what we do as developing humans, how we take raw data and information and learn to craft connecting ideas, thoughts into images into ideas into logic, the whole of it more impressive than anything we claim as adults. As adults we manipulate the hardware and the software of the brain to make sense of our world; As children we build the hardware and software from scratch and call it the world.

At the core of the Pippiverse are two innocents who serve as our grounding, Tommy and Anika. They provide the necessary balance that allows the Pippi books to endure because they counter the desire to "be good" with the twined desire to explore without rules. When challenged, even to the brink of hysterical danger, everything works out in the end because deep down Pippi has total unspoken faith that it will. I don't think it would take much to apply the lessons of Pippi into some warm-and-comfy self-help impulse item sitting on the counter at your local chain bookstore. Here's hoping no one thinks this is a good idea.

Many books for children feature troubled families and it's an odd comfort we find in seeing that others might have it worse than we readers do. I 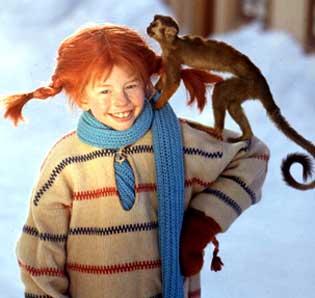 know I'm not the only person who felt like his family was severely dysfunctional while viewing other equally dysfunctional families as more "normal" than my own. That sense of "other" aside, what tripped me up while reading was that I didn't believe Pippi when she said her father, The Captain, would come home one day. I committed the adult sin of doubting a child. No matter how fictitious, I'm sure that as a child myself I would have taken Pippi at her word or at least given her the benefit of the doubt where my adult mind tried to force the story to conform to my own adult sense of what was "right". What a joy -- an honor, really -- to be bested by Pippi like all the other stubborn fools she's encountered.
Posted by david elzey at 7:51 PM