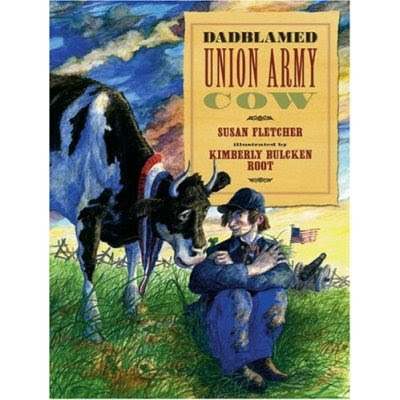 I was hooked from the word "dadblamed."

There's more, of course. I mean, how often do you run across picture books about Civil War cows? And this cow's a beaut. She follows her owner as he enlists, she follows him onto the railroad car taking his regiment into battle, getting in the way and giving milk as she goes. She gets stuck in the mud, runs amok in battle, swats away flies from the soldiers while they eat. All around, that dadblamed cow turned out to be a mighty good soldier. 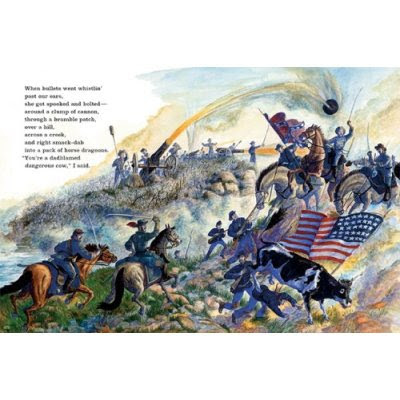 Naturally, based on a true story. I'm sure every nation and every war has it's own version of animals on the front lines, but I'd never heard of a cow with this much loyalty, or of one given this much tolerance. Despite the dangers of a rampant cow on the battlefield it turns out her milk may have saved lives as supplies were often slow in getting to the front. Most amazing to me is that this cow was never felled by enemy or friendly fire, nor was she eaten, and in fact lived many years after the war.

Dadblamed indeed. What we need are more true stories of heroic bovine. More books with old slang-swearing in the title as well, please.
Posted by david elzey at 10:26 PM