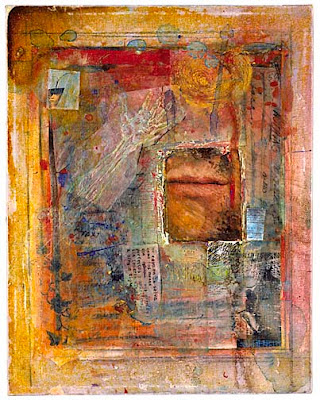 It's funny, how you think you know someone in the public eye as they come into your world view and then discover they have a life going on you never imagined. I was trolling the remainders section of a bookstore in Berkeley (Moe's? Pegassus?) shortly after the release of the film A Perfect Murder starting Mortensen, Michael Douglas and Gweneth Paltrow. Its a remake of Hitchcock's Dial M for Murder and in the film Mortensen played a poor artist and con man. The remarkable thing is that the paintings in film are actually Mortensen's, not some production artist's idea of what his character would create. They are dark, accomplished, not the work of someone who dabbles.

Anyway, trolling the remainders, yes, and there is a book with Mortensen's name on it called Recent Forgeries (1998 Smart Ant Press). It's got paintings and photos, black and white and Polaroids, and poetry in Spanish and English, and a CD of readings with music by members of the seminal punk band X. Clearly there's more to this Viggo guy as I later discovered he was once married to poet and punk doyenne Exene Cervenka, is fluent in a half dozen languages, and has been running three parallel careers as a poet and painter alongside his acting career. Who knew?

We underestimate damage
done to the sky
when we allow words
to slip away
into the clouds.

I remember making promises
to you outside. We
were watching flowers
that hadn't opened.
A bee darted, careful
not to stick to
your half-shut mouth.

Moretnsen apparently does readings in the Los Angeles area with his son, Henry, and has used some of his earnings from the Lord of the Rings movies to found a publishing house for avant garde artists called Perceval Press. You gotta love a guy who starts a small press whose landing page on their website features art, quoted poetry by Edna St. Vincent Millay and Emerson, and has political news updates.

The boy who cried wolf is
the man who cannot decide.
Can't lie; Never gets away
with it. Save feathers
he finds, believing
they come from
dreamers' wings.

Wishing so hard, he
starts looking like
others, absorbs them.
Wishing like that
wears him out
after a while
and then he feels
sorry for himself
and takes it out
on anyone that seems
weak.

He's not just a face on the screen.

Poetry Friday is being hosted over at AmoXcalli this week.
Posted by david elzey at 11:21 AM

AND he was on the Colbert Report.

I knew he painted and wrote poetry, but I didn't know he'd started his own press. He's making the rest of those pretty faces look bad.

Holy Cow! Now I really have a crush on him!

I saw an interview with him once and thought he seemed incredibly complex and - well, definitely not your average Hollywood hunk. But damn, he didn't mention ANYTHING about poetry or painting. Thanks for the glimpse at his other talents.

He's actualy only fully fluent in 4 languages-English, Spanish (he lived for 8 years in Argentina and Venezuela), and Danish (his father is a Dane). He is mostly fluent in French.

He also speaks Norwegian, Swedish, and Italian, all passably. He was a translator for the Scandinavian hockey teams (Sweden, mainly, iirc).

He speaks a bit of Russian (because of his latest film), and Lakota (for Hidalgo). I would not be surprised if he picked up Maori whilst in New Zealand for LoTR. One of his books is titled in Maori, I believe.

Also something of a photographer, and sometimes musician, though I gotta say I don't get his music. I guess you would call it "experimental jazz," but I would call it noise. He's about to release a classical music CD - piano pieces he supposedly dug up and played while researching his role in Good.