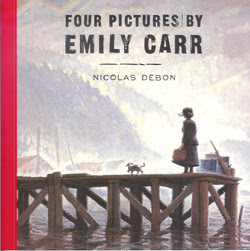 Travel broadens the mind, there's just no other way to explain this discovery. While traveling through Europe I stopped in an art gallery, in Amsterdam, that contained Australian Aboriginal acrylic paintings. I'm not going to mix things up here by showing you what they look like, but I had an immediate draw to them and when I got home I began researching Aboriginal art.

Hitting the shelves at the library I wasn't happy with what I was seeing so I requested some inter-library loans. In the meantime I browsed the general art survey section hoping, perhaps, to alight upon some information by chance. And there among the titles was this book. Something familiar about it, the name? Yes! The same artist who did the book The Strongest Man in the World: Louis Cyr. Huh, look at that. I hadn't even thought to see if he'd done anything before. I must be slipping, or busy, or something. 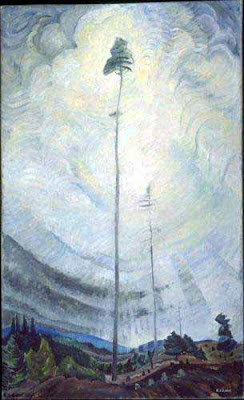 In this book Debon uses four paintings by the Canadian artist Emily Carr as a framing device to tell her life story. That's a bit of a stretch, really, as it isn't so much a biographical book as it is a collection of sketches centered around four of Carr's works. Utilizing graphic novel-esque panels to present her life we are shown; Carr's early life living and painting the landscape and the Native people of British Columbia; Her studies in Paris before the Great War when she was in her late 30's, including her first exposure to modern art and her inability to handle feeling confined by cities; Her inclusion in a retrospective of Canadian artists after abandoning her painting that puts her in contact with other artists and reinvigorates her; Her later years living like a gypsy and painting in nature.

Like a portrait that only shows you a single expression, a surface that contains hints at deeper emotions and subtext beneath, Debon ends the examination of his subject without further comment. So much is left out, so many missing details, that the book could not be considered a biographical account by any stretch of the definition. It is an impression at best, a multi-faceted portrait of one artist by another presented in format that doesn't quite work. There are narrative aspects to the segments and some illumination around the events surrounding the representative paintings, but the exercise ultimately feels empty.

After this and the Louis Cyr book I have to say that at least Debon seems to be getting better at telling stories with his pictures but he still hasn't got the hang of what it is that makes his subjects interesting. With both of Debon's books I'm left feeling ... eh ... with no desire to dig further into the lives he's chronicled. Perhaps that's why I didn't find this book earlier.
Posted by david elzey at 9:05 PM