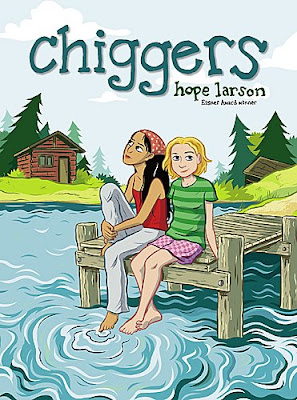 Abby has arrived at camp first (as usual, due to her mother) and as the other girls arrive everyone slips back into their camp personalities and cliques. Abby's closest friend Rose has returned as a counselor this year and her additional duties preclude her and Abby from hanging out as much.

As the bunks fill in her cabin Abby ends up with new girl Deni beneath her who spends her day complaining about what a dump the camp is and her nights scratching herself into oblivion. The girls come back to their cabin and find Deni mysteriously gone, and quickly the rumor is she contracted chiggers and was sent home.

The next girl to fill the bunk is Shasta, a hippie-esque weirdo who refrains from many camp activities due to her own mysterious illness, a illness that requires a daily medication she refuses to take. While Abby has always been a sort of fifth wheel around her cabin mates, Shasta is the out-and-out weirdo, and when Abby is stuck showing the new camper around she finds herself battling between distancing her self from Shasta and making friends with her.

Shasta, it turns out, was struck by lightning and occasionally finds her hair raised on end and little balls of lightning drift into her cabin looking for her. There's tension between Abby and Shasta when they find themselves attracted to the same boy until Shasta is sent home for failure to take her medicine. Camp ends with a kiss and a bandanna and memories that make camp that place where strangers are friends for life until it's time to go home.

Larson's graphic novel pulls off the trick of being episodic without feeling episodic, telling the story of a summer without a plot. Abby, and all the girls for that matter, are mean and nice, conflicted and assured, friends and enemies. They are kids at that age where everything is possible which means they run hot and cold with the wind. Everything is possible at camp, and Larson picks out those moments that highlight those possibilities; the friendship bracelets, the games of capture the flag, the overnight hike with the ghost stories and a flashlight. None of it cliched or bathed in the patina of nostalgia or underscored with "deeper meaning" than the moment it exists in. 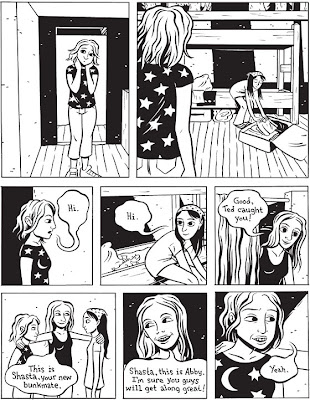 More like this, please.
Posted by david elzey at 6:20 PM