My Dad's a Birdman 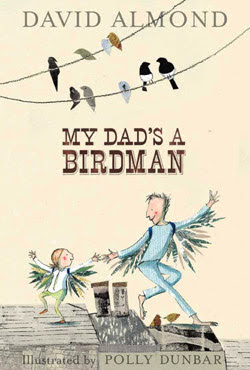 Lizzie's a bright, independent girl who gets her self up in the morning, gets dressed, makes tea and toast, and calls her dad down to breakfast. But dad drags. Dad droops. And when asked what his plans are for the day while she's at school dad announces that he's going to fly like a bird and enter the human bird competition. Suddenly we are faced with a role reversal of a responsible parent-like child and a child-like parent. What would cause this reversal only becomes obvious by the lack, and no mention of, Lizzie's mother. This is made clear a few chapters in when Lizzie's Aunt Doreen drops by to see to how Lizzie and her dad are getting along. Once she sees that dad has fashioned a set of wings for himself and has taken to eating bugs (in order to be more bird-like), and that Lizzie has taken to staying home from school to watch after her dad it becomes painfully clear that we are dealing with a great unspoken grief.

In the end Lizzie and her dad participate together in the Great Human Bird Competition, a sort of flugtag where people adorn themselves in wings and rockets and whatnot and attempt to traverse a body of water propelled under their own power. Dad's obsession with flying at first seems a bi-product of a mental break-down, but as Lizzie (and eventually her Headmaster) discover as they participate in the competition, the act of faith necessary to hurl yourself into the world is exactly what they both need in order to move ahead with their lives. Feeling more alive than before, they reconnoiter back at Aunt Doreen's for some dumplings and find themselves dancing with a new-found joy, a joy that leaves them lighter than birds and flying off the ground.

Almond has managed to dip his pen into Roald Dahl's inkwell and produce a magnificent examination of what it means to find joy after loss, for a family to find their way through the other side of the darkness no matter how odd it may look on the outside. Aunt Doreen and the Headmaster understand the situation and are keeping tabs to make sure that Lizzie and her dad don't fall to far off track, but they hang back enough to let the process run its course.

The feel of this book is what gives it the Dahl flavor in my mind. It would be hard to imagine this story in a contemporary environment without meddling government agencies and relatives who would insist on remaining in the home to assure everything was alright. Aunt Doreen makes a social call but is driven from the house by the sheer absurdity of it all, promising to return with help. The help she return with isn't the police or child protective services but the school headmaster who is more interested in joining Lizzie and her dad in their adventure rather than find fault, place a judgment, or insist on a return to normalcy. It is also in the child as the responsible one and the adults as fools that I find the spectre of Dahl lurking.

Almond can't seem to get away from the connections he makes with birds and death, and certainly there's enough mythology, symbolism, and history to support these connections. But Almond chose the bird's ability to fly to show a rising above, a phoenix-like symbolism for a family being reborn from the ashes of their sorrow. There is nothing sad or sorrowful in the book itself, the entire affair has a sense of whimsy to it, but it's all there just below the surface allowing us to how happiness and joy can re-emerge from experience.
Posted by david elzey at 12:48 PM