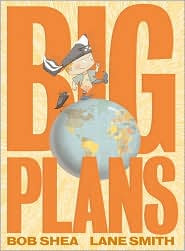 Last year author Shea gave us some New Socks to play with, and they were good. Just the one image of that a chicken, with glasses, using a sock as a phone was enough for me. That's how kids are, that's how they play, I'm good. I think that for a certain age level picture books ought to try and capture that sense of childlike whimsy (claiming they're the biggest thing in the ocean, for example) and New Socks did it.

Shea's back, tugging illustrator Lane Smith for the ride, and things don't roll so smoothly. We start with a boy facing the corner of his classroom, obviously on punishment, the chalkboard full of all the "I will not's" he's most likely committed. From this single opening spread we learn that this boy rolls his eyes, schemes, laughs when others speak, isn't nice, proves the teacher wrong, considers himself the boss of the class, and announces that what he says goes.

I hate this kid.

I hate this kid so much that everything that follows better show me in some way that he is charming or in some other ways undeserving of this punishment in the corner, otherwise this book is really going to piss me off.

This book pissed me off.

He's got big plans, he announces, and he screams these words in 240 point type across most of the book. He's going to shout at the yes-men in the boardroom, take on the mayor, verbally assault the president. He's going to wear a skunk as a hat (because the only thing that stinks worse is this kid's attitude) and march all over the world shouting down everyone and everything else with his big plans. He's going to take over a losing football team (with his yes-man mynah bird) because losing is not part of his big plans. He'll order people to do this and that, and when he goes to the moon he'll order the rocks be moved so they can be read from Earth announcing his big plans.

And in the last spread we see that all his planning and scheming were a direct result of all the things surrounding him in the time out corner. There's a map of the moon and a book of presidents, and his snide little smirk that says "Yeah, they can put me in the corner, but I'll show them one day."

I never want that kid to leave the corner.

You know how it is when you get an email from someone who doesn't realize that writing in all caps reads like shouting? This book feels just like that, only worse. It's a bossy kid with a microphone hooked up to the Who's loudspeaker system shouting about his big plans at 160 decibels ten feet from your face. Did it have to be so loud, Lane? Couldn't the kid be less of a schmuck and more of a dreamer? Couldn't there be something in this kid that would make us want to root for him to take over the country and fly to the moon and be the star football player?

Not cute, not endearing, and please, let no one read this to boys at story hour unless they want an army of bossy boys shouting down adults and thinking they own the world, or a dozen time-out corners in need of occupants.
Posted by david elzey at 7:48 PM