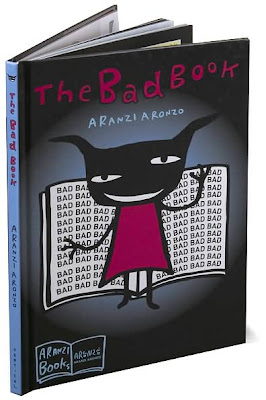 So many words to choose from, so many possible titles. People, people, don't give your book titles that can serve as their own reviews.

Okay, so maybe it isn't the worst thing I've seen, but I'm trying to remember now why someone thought I would like this. Basically it's like a snarky Hello Kitty comic, cute but sarcastic. More like a Batz Maru squared, actually, because the main characters are Bad Guy and Liar. In a collected of super short, often pointless cartoon stories, Bad Guy and Liar engage in the type of shenanigans that might pass for humor in a flash animation pop-up box on the internet. Bad Guy in summer is squirting a hose and SPLASH! he squirts you in the last panel. Bad Guy trips Liar and has a good laugh until he sees blood, then Liar lifts his head and says "I was lying" while an arrow points to the red pool and notes it's tomato juice. Ha ha, it is to laugh.

Thoughout there are photo spreads of a highly marketable Bad Guy doll riding the escalator rails, dressing badly, and generally mugging for the camera. Cute, but not quite cute enough.

Aranzi Aronzo are actually a pair of Japanese young women who are big on cute crafts and have a passel of cute books to their credit. It is part of the Japanese cute movement (kawaii) that would include the likes of pandas, bunnies and, no doubt, the Queen of Sanrio. As marketing, well, I guess there's always an opening for something between Strawberry Shortcake and Ugly Dolls, but I'm not feeling it here.

Oddly, this title was lurking in the YA section at the library. Perhaps in a world of lowered expectations some might find this amusing. I can't imagine a pair of teens or even tween pulling something like this together and creating an American kawaii empire of their own. Perhaps it might even be amusing.

I need to remember who suggested this to me, and then I need to make sure I take those suggestions with a grain of salt in the future.
Posted by david elzey at 5:13 AM