Jack and the Box 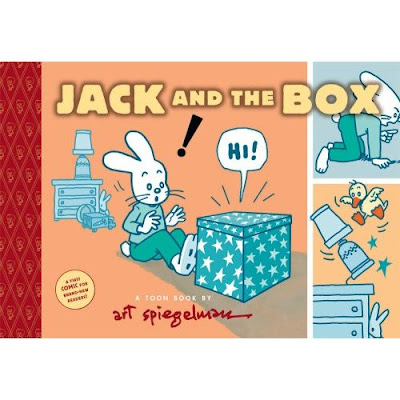 Earlier this year when the first batch of Toon titles came out I was less than enthused. The problem as I saw it then was that the titles seemed little more than traditional comic book fare with expensive paper, better printing, and hard covers. I couldn't reconcile the content with the cost and felt that they were best suited for libraries who would do well with studier bindings, not with the general consumer (picture book readers) who would tire of the titles quickly.

Now with the second round of releases I'm finding this less to be the case, but its book specific. Spiegelman's Jack and the Box isn't merely " a first COMIC for brand-new readers" as it says on the cover, it's actually a subtle and sophisticated tool that helps introduce readers to the concepts in reading and understanding comics. It is a primer on comic literacy at the simplest level, and clever. I doubt Spiegelman could have delivered anything less.

The book opens simply enough with a single illustration of Jack (Rabbit) being given a new toy. Two simple word balloons establish the order of both reading left-to-right and lead the viewer's eyes to follow the action accordingly. With a flip of the page we are now presented with a double page spread of four equal sized panels. There's the conflict of the first panel (Jack can't open it), the tension in the second panel (watching the box, waiting for something to happen), the action in the third panel (a clown pops out of the box, jack-in-the-box style, scaring Jack), and a punchline in the fourth panel ("Ha ha!" "What a silly toy!"). With a few words and some simple pictures a first encounter with a jack-in-the-box is turned into the core joke on which all future variations will be built. Since humor is generally derived from the unexpected turn, from the deviation from what is expected or established, Spiegelman can now train young comic readers to learn how to read for visual cues and verbal repetition. It's a winning combination and, to the casual reader, a subtle lesson in how to read comics.

Jack now has a series of comic adventures with the toy, each four panels across the spreads, built on the idea of an uncooperative toy and its unexpected behavior. We've been told it is a very silly toy so we aren't surprised to see it talk back or misbehave. There's the slightest hint of Cat in the Hat style mischief, and a sense of a child's play world being realistic to the child but confusing to adults, which adds another layer to the book. As the comic stories add and build, and the chaos grows, there is a need for release at the end that comes in Jack explaining all that has transpired to his curious parents, the denouement so to speak. Order is restored, and Jack now safely has mastered the silly toy the same way the reader has mastered the complexities of a comic narrative.

While there are other books out there for the picture book crowd that work within the comic framework (Regis Faller's Polo books, for example) there are few that work this hard, this effortlessly to train readers to the art of comic literacy. I hope that Toon continues to build off this lesson with their other titles.
Posted by david elzey at 7:15 AM