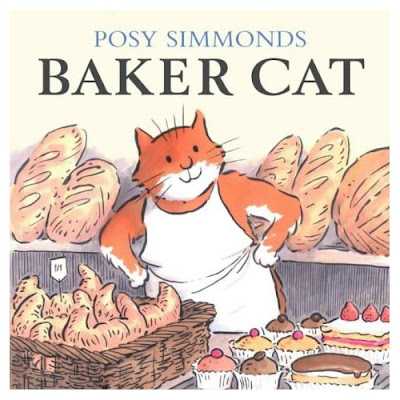 A mean old baker and his lazy wife have a cat who literally does everything for them. He sweeps, he peels, he slices, he mixes, he rolls, he ices, he bakes, he does the washing up, and at the end of the day is sent exhausted into the storeroom and told he has to ear his keep by catching mice. Exhausted, the poor marmalade tabby collapses while the mice have their way.

The mice take pity on Baker Cat and strike a bargain: if Baker Cat promises to leave them alone they'll get the baker to leave him alone. The plan involves spinning yarn to look like mouse tails, trophies of his night's work that the baker uses as a gauge to determine how much to reluctantly feed him.

And for a while it works, until the free reign of the mice depletes the larder and the baker threatens to turn Baker Cat into fur gloves if he can't make meringues and tarts appear by morning. Again, it's the mice to the rescue, and the next morning they have set a trap to make the shop look infested by all sorts of vermin. Fed up, the mean baker and his lazy wife ditch the shop, leaving it for Baker Cat and the mice to manage on their own, free of human oppression.

First, if the cat is this accomplished, why doesn't he go into business for himself? Oh, that's right. He's a cat. But then, he's already dealing with customers and working the kitchen so clearly he has some extra-feline skills. Perhaps it's an opposeable thumb. Is it because he needs humans to get the supplies? Well, the mice are excellent thieves, so that takes care of that.

You know, I like this. I'm not looking to tear it apart, but it's so... odd. It's odd in a way I can only call British but without support. It's from that part of the country where the world of nursury rhymes still live, where people possess animals as slaves as well as pets. It isn't alarming or distressing that there is a cat wearing an apron pushing a broom across the shop floor, it appears folks rather expect it. No one seems concerned with cat hairs on their breads - they probably have hairier food in their cottages just down the lane.

But here's another thing: Baker Cat is a passive protagonist. Baker Cat works, Baker Cat suffers, and in the end is too exhausted to do anything about it. Okay, you say, Cinderella didn't exactly make her own dress or conjure her own ride to the ball. Ah, but she had a dream, a desire, and in her longing she was provided for. Not Baker Cat, he just waits until the mice rescue him. And rescue him. And after the mice have twice rescued him he is rewarded for his lack of efforts by gaining a store that the mice help run. It's like a cross between The Cinder Girl and The Shoemaker and the Elves, but with animals, and with less ambition. Baker Cat may not be mean like his former owner, but he sure is lazy.

At least Baker Cat and the mice live in harmony, and the mean and lazy are vanquished.

Simmonds is a cartoon artist, and there are elements of her cartoon work present here. Spreads in the picture book alternate between full page illustration and smaller, panel-free progressions across the page. She has an engaging style slightly reminiscent of Raymond Briggs crossed with William Steig. I came across his while looking up her graphic novel Gemma Bovary and I have to say I preferred this quite a bit.

Why I didn't think of this before I'll never know, but here on out I'm going to try and link the cover to someplace where you can purchase the book at hand. I'm not out to necessarily shovel business for gain, I'm only thinking that maybe I could save folks some time if they're interested.
Posted by david elzey at 7:11 AM