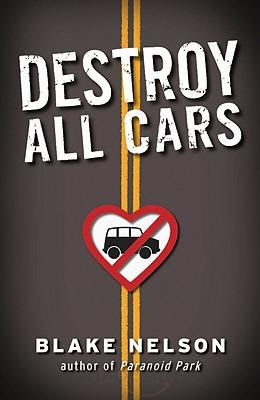 There's a lot about this book I really, really like, and a lot of stuff that bugs me.

James Hoff is a self-righteous, pessimistic seventeen year old who believes Americans consume too much. Cars, in particular, make him angry, but the entirety of consumer culture sends him ranting. Being a hormonal seventeen year old boy, vain outsider or not, he's still interested in girls. In particular there's his obsession with Sadie, his ex-girlfriend of the previous year, a do-gooder who is politically active where James is all talk. James' bile-filled tirades against Sadie ring false because they are, and when he's finally finished floundering around manages to rekindle their affair briefly before they both decide to move on with their new "adult" lives.

Throughout the book, James includes journal entries and essays for his English teacher that cover his views on the world as well as his personal life. When he isn't ranting about the destruction of the planet, he's talking about nature, about what it means to be a teen, about friends and family, about the superiority of Oslo, all from the same ill-informed place that most of his adolescent brooding comes from. A classic smart-mouthed dumb ass.

Stories like this told in first person – where the reader has to read a little between the lines to get what the main character is really saying – require a deft use of character voice. The tone and pitch have to be perfect, otherwise the spell is broken and the reader becomes frustrated or disillusioned or just plain bored. I don't really like this character of James up front, then just as I start to see what his game is and like him a little I begin to feel a little bored with him. It takes a little too long for the love stories to fall into place, and James' essays tend to belabor their point beyond their intended humor. It feels like if it could just be tightened up a wee bit it would be perfect. Maybe about forty pages too long. And a few more teeth in its bite.

Another thing that sort of ruins it for me is the environmental angle being played for humor without any conviction. The kids in the story who are attempting to make a difference or finding effective ways to protest "larger issues" are derided by James and shown to be less deserving success than our disingenuous cynical narrator. Teens probably know the types, and laugh, but what are they laughing at exactly? The shallow big mouth loner kid gets the girl (a few, actually), and he eventually has a last-chapter awakening that lends his previous posturing credence, which seems to suggest that the kids doing things in earnest somehow don't deserve the same thing.

For those who care, there's sex involved. Talked about, engaged in, and I don't really have a problem with it... except here I do. I know James and his friends are seventeen, and that real seventeen year olds are engaged in sex, but the characters involved here all feel too young. And by young I mean immature. It's the opposite of the problem TV shows and movies have where they use 25 year olds to play teens; here these characters read, talk and behave like they're years younger then they are. The dialog is genuine, it reads authentically, but it reads like smart seventh graders and not average eleventh graders.

Destroy All Cars is a teen romance aimed at boys that deftly uses a pro-environment message as a delivery device. The heart on the cover should be the giveaway, but for boys that don't catch that they might find themselves enjoying the little slice of romantic confusion that Nelson has put together.
Posted by david elzey at 5:51 AM