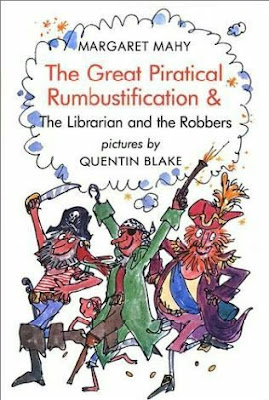 Two books worth of story crammed into 63 magical pages, full of robbers tricked by librarians and retired pirates who know how to party and revive the joys of boyhood (while paying the bills). No impossibly articulate child protagonists with clearly defined goals or desires, no rhyme or reason, just a pair of stories cut from the same cloth as books by Willaim Stieg and Roald Dahl.

In the first story, it is spring and the retired, land-locked pirates are restless. They long for a Pirate Party but the sign in the sky informing them of a pending party is not there. The problem is that a pirate party must be stolen.

Next we see the Terrapin family, having moved up from their cramped flat to a spacious house. The three Terrapin boys have been promised that with a bigger house came opportunities for adventurous behavior, but father's overwhelming dread at purchasing a house beyond their means has soured things.

It is only natural that these two parties be united, and when the adult Terrapins call the Mother Goose Baby-sitting service it should be no surprise that they are assigned an ex-pirate as a sitter. Fears of qualifications quelled, the boys find their sitter deserving, and with this the boys are off. Sitter Orpheus Clinker sends up the announcement that he has found a suitable location, and a Pirate Party proceeds to take place at the Terrapin's.

Father Terrapin is at a big, important dinner but he senses something wrong, something taking place elsewhere that is more fun. There appears to be some great rumpus taking place in the part of town near his house, and how he wishes he was there. Leaving the important dinner as soon as he can possibly escape he returns home to find a Pirate Party well under way. Once over his initial indignation, Father Terrapin falls in and enjoys the Pirate Party, after which he is richly rewarded by the pirates and never has to worry about his financial situation ever again.

Our second story in this double-feature finds a band of woods-living robbers who have come upon the idea of stealing the town librarian for ransom. Her warning that she has recently spent time with children infected with measles goes unheeded and soon all the robbers but one, the Chief Robber, are sick. Allowed to return to the library for a reference book to heal the sick robbers the librarian returns with books to read. Having never been read to, or taught how to read, she begins with Peter Rabbit and proceeds to give them a classic education in children's literature.

Eventually everyone forget about the ransom and the librarian returns to work. One day the Chief Robber dashes into the library to escape being apprehended by police. With quick thinking the librarian shelves the Chief Robber and refuses to turn him over to the police without a library card. Of course, once the officer has left the librarian slyly checks the robber out for herself and prevents the officer from coming back and apprehending him for the indefinite future. Saved, the Chief Robber continues with his initial task: checking books out for the other robbers because now they have insatiable reading habit.

I can understand some of why this book was withdrawn from my town library and put on the 25 cent shelf in the sales alcove. It is hard to imagine any book today would be published where a babysitter requires rum as part of his services, and that he carries a bottle large enough in his coat pocket to cause him to list to one side when he walks. And I'm not sure what to make of an adult male, upon meeting three young boys, exclaiming how he likes the cut of their jibs. Indeed, this very slang expression is the sort of thing that caused me to snort out loud.

But we are talking about pirates here, and removing rum and salty pirate talk (within reason) is like drawing cows without udders or exchanging water for soda in stories because we don't want to scar or unduly influence young minds. This political correctness has its place at times, but not here.

And these are stories about adults primarily, adults behaving like children at times but adults nonetheless. It's as if we don't expect children to identify with anyone except protagonists their own age, but so often these child protagonists are forced to carry the weight of stories and messages beyond their years. The idea of fun seems no longer the province of adults or kids in children's books anymore. Do we think that kids won't understand or identify with a parent character longing for the carefree days before bills and important dinner? Do we feel that they'll reject a book because it includes a romance between an unlikely duo, one half of which is a librarian?

Also, I admire the amount of ground covered despite the brevity of the text. The Great Piratical Rumbustification is told in thirteen chapters, many of them fewer than three full pages. I know this is a hallmark of books aimed at readers who are still gaining fluency, but I'll take a dozen well-crafted books like this any day to a sprawling attempt to build the chapter book into something more substantial from fewer parts.

Readers who appreciate the absurd humor of The Twits or Flat Stanley or the books of Daniel Pinkwater will be rewarded.
Posted by david elzey at 4:35 PM

I'm willing to look at almost anything illustrated by Quentin Blake--and this sounds like a good choice for his illustration style.

One of my favorite read-alouds, both stories.

How have I missed this book all these years? I'm putting in on hold now.