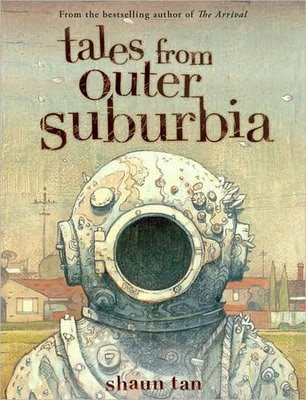 I've been wanting to write about this since before it came out. Life gets in the way, and books get shuffled further down piles, and suddenly a person finds themselves thinking "Wait, didn't I already review that?"

Following Tan previous books to these shores, The Arrival, I know there was a lot of anticipation over how Tan would follow-up his genre-bending stranger-in-a-strange land tale. Well the answer is that he did it by creating fifteen entirely new strange lands, or perhaps they're all an extension of the same strange land, but clearly this Outer Suburbia is proof that there are multiple world in his creative universe.

The problem with coming late to the review party is that it's difficult to find something to say that hasn't already been covered. Nonetheless, I'll give it a go and see what surfaces.

Tan's Outer Suburbia is a place where the unusual isn't. An over-sized water buffalo occupies and empty lot at the end of the street, silently dispensing advice with the point of his hoof. A pair of brothers set out to the edge of the map to see if, indeed, the world continued beyond what was on the page or if it dropped off into an abyss. In keeping up with the arms race the government places missiles in every citizen's backyard, for them to take care of, though over time they have become pizza ovens and tool sheds through disuse. It's a familiar world and alien at the same time, a place a little odd from the outside looking in. Then again, one culture's norms are another one's peculiarities, and so who are we to judge?

Sometimes this absurdity has its darker side. "The Undertow" appears to be another absurd story about the mysterious appearance of a dugong on a suburban lawn. As a rescue is underway the occupants of the house are too busy shouting at one another to notice the commotion outside at first. Only their son seems to know what the creature is, but no one can fathom how it got there. Once the dugong is rescued the neighborhood returns to normal. The parents in the house shouting and throwing things at one another fail to realize their sun has remained outside to lie on the lawn looking up at the starts, hoping his parents never realize he is outside yet waiting for their inevitable verbal abuse. Instead, the story ends with them coming out to silently carry their son back into the house.

I single out this story because, for me, this is the heart of this collection. Though I doubt this was Tan's intent, all these stories could be the fabrication of this one boy's imagination. His escape from his outer suburban nightmare is an inner retreat. True, many of these stories are too complicated to be part of the inner life of a boy who feels trapped in an abusive family situation, so then the story feels like an allegory of suburban angst, that displacement that allows people to accept the absurd as part of their daily lives. The stories we tell ourselves to remain calm and grounded, sometimes these are no less absurd than a foreign exchange student who looks to be extraterrestrial and is the size of a tea cup.

On a more practical level, Tan once again confuses me with his intended audience. This picture book has stories too long and too complex for most picture book readers, so I have to conclude that the book is intended for older readers who are not afraid to read a book with color illustrations on nearly every other page. In some ways this book is a throwback to another time, when the picture book was not limited to the beginning reader. I am thinking on my beloved copy of Dahl's The Magic Finger which was originally published in picture book format with illustrations but currently exists as a more conventional paperback intended for middle grade audiences. I always believed that the Dahl conversion was partly a concession to keep picture books "simple" and move the books with more story up as reading levels and abilities shrank. That is, the audience is being held back from more complex stories, and if Tan wasn't also the illustrator of this book I could totally see it sitting on the shelves with middle grade titles.

Unlike some illustrators whose picture books seem aimed at an adult audience, Tan's book is clearly meant to appeal to a younger reader. It is refreshing to see speculative fiction and fantasy done so well that it appears more literary, and Tan's visuals alternate between his unique pen and ink to a rich pastel and forced-perspective compositions that recount the work of artist Wayne Thibaud. It has the strange effect of quietly drawing attention to the quality and care of the presentation on all levels, and underscores just how weak and careless other picture books are in comparison.

Tales from Outer Suburbia reads like a modern The Twilight Zone for kids. That's a Rod Serling reference two days in a row, but what the heck. You unlock this door with the key of imagination. Beyond it is another dimension - a dimension of sound, a dimension of sight, a dimension of mind. You're moving into a land of both shadow and substance, of things and ideas. You've just crossed over into...

It's a gorgeous book, a haunting book, a playful book, the kind of book that invites repeat readings and delivers new insights as a reader gets older and becomes more experienced with the world.
Posted by david elzey at 5:15 AM