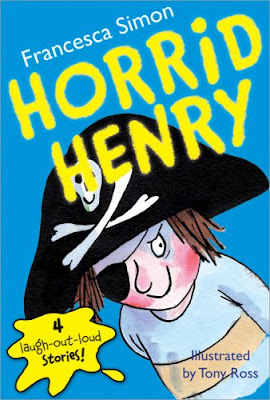 Henry is a horrid little boy, and everyone says so. He's devious, mischievous, he's stubborn and prone to getting into trouble. Naturally he has a perfect brother named Peter. Peter is good, and kind, and everything Henry is not. In fact, even Henry's parents are fond of asking Henry why he can't be like Perfect Peter.

So much of what motivates Henry is ruining Perfect Peter's life any way he can.

There is the palpable undertone of Roald Dahl books here, from the at-wits-end parents who are simply worn down by Henry's antics to the illustrations that bear more than a passing resemblance to work Quintin Blake has done as Dahl's official illustrator. There are four breezy stories to each of the six Horrid Henry books either released or pending and if one doesn't look to deep they are exactly the sort of book emerging boy readers would delight in reading.

But after I put them aside for a bit and picked them back up I began to feel less easy about them. It isn't the books so much as the marketing approach the publishers have taken. Right on the cover they announce that each book contains "4 laugh-out-loud stories!" in each, the way a detergent would advertise "20% more for free!" as enticement to pick them up. No one actually measures to make sure they got that extra 20% any more than any parent or reader is going to hold the publisher to that "laugh-out-loud" claim... so then why is it there?

Then on the inside we are treated to a splash page announcing Horrid Henry as worldwide sensation, followed by three pages of testimonials from children and adults alike verifying that, indeed, Horrid Henry is not only funny but it will cure carbuncles and teach your parrot French in ten days. Well, no, it doesn't say that, but it may just as well for how hard it is trying to convince the reader that these books are, indeed, the funniest thing every to reach these far shores.

It's then that I realized that the reason they were working so hard to underscore the humor is the simple fact screaming from the title of the book: Henry truly is horrid. He's unrepentant, often unpunished, and by most accounts horrid for horrid's sake.

I've battled this demon before, the one that screams in the back of my head "What's the big deal about books where kids can revel in a character behaving badly?" It first showed up with Captain Underpants where I found the underwear jokes and absurd villains pure boy amusement. They were clever, enjoyable, and they hit young boy readers right where they stood. The problem was that these same boys couldn't and wouldn't venture beyond these titles. They had been pandered to in a way that permitted them to demand more of the same or nothing else. They became the book equivalent of watching boys set a garage on fire with a "boys will be boys" sigh attached.

I'm not saying I didn't enjoy these books (or Captain Underpants for that matter) or that I wouldn't recommend them for parents and teachers looking to engage boys in reading at a very crucial moment in their development. But I am alarmed to see publishers and adults giving up on these boys so completely that the only way to appeal to them is to engage their darker instincts and play it up as humor.

No boy is going to want to identify with Horrid Henry any more than they would Perfect Peter – and perhaps the less said about Peter's latent fey tendencies that better – but I do wonder if, in a generation or so, the only way to reach this same age group will be through some other extreme form of humor. I'm not blaming Simon for this, but I do feel the genie is out of the bottle and that nothing less will do when it comes to engaging a certain subset of reader.

Or I could be overreacting and these are perfectly benign, amusing books for the beginning reader. Maybe the prickles I feel at the back of my neck aren't connected at all.
Posted by david elzey at 6:19 AM