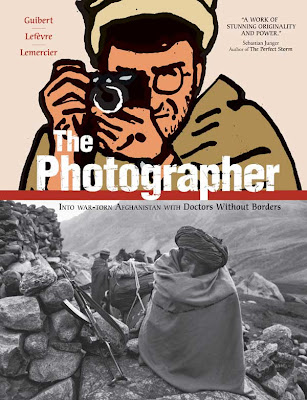 I don't know how to explain this. There are books you read that pry open a whole world you never knew existed. I mean, you've heard of places like Afghanistan and Pakistan, you've heard of small villages living in remote regions, you know organizations like Doctors Without Borders exist and you know what they do, and you might even know (or remember) some recent history about the Soviet invasion and war with Afghanistan in the 1980s... but somehow it doesn't all add up to a single picture of that time, or place, or experience until a book comes along and drops you into the deep end and your fully immersed.

In 1989, a young French photographer named Didier Lefèvre is asked by the organization Médecins Sans Frontières to help them document their efforts to provide medical care to Afghans living near the war front who are without doctors or resources. It's a grueling journey requiring the group to sneak across the border of Pakistan illegally, to get to the farthest outposts where medical offices can be set up and, for Lefèvre, to make his way home safely on his own. Years later he recounts his stories to his friend, the illustrator Emannuel Guibert, and together the create a trilogy of books that document the experience. Those books, bound as one, are The Photographer: Into War-Torn Afghanistan with Doctors Without Borders.

As explained in the afterword, the concept was for Guibert to illustrate the story surrounding Lefèvre's photos, turning the enterprise in an unusual, and richly rewarding, hybrid of a photo travelogue and a graphic novel. The mix of graphic elements at times can feel like an artists scrapbook - along the lines of photojournalists Peter Beard and Dan Eldon - or sometimes require several pages of illustration that calls to mind (literally at one point) Tintin comics both in landscape and style. It's like a documentary with the narrative flow of fiction.

And it's about war. And people trying to do good against all odds. People and animals die with regularity. The absurdities of human experience abound. There are moments of terror and moments of humor and moments of great beauty. It is as much about the person behind the camera as much as the people being documented in front of it and shows that, if anything, a photojournalist's life isn't as glamorous as some might believe.

I felt this way when I read Marjane Satrapi's Persepolis some years back. It wasn't that I didn't know something about Iran, it was all that I knew was through Western eyes and media. It had never occurred to me – nor could I imagine – what it would be like to grow up during the Iranian revolution of the late 70s and the overthrow of the Shaw. I had met many who had escaped Iran during that time, people uneasy with the coming reforms, and I knew their stories but not those of the ones who stayed. In The Photographer. Lefèvre and Guibert fill in some gaps about the Soviet conflict with Afghanistan in the same way, showing us what the Western (let's be fair, mainly American) world did not report. The borders were full of peasant villages, with Afghan troops on foot or with pack mule, facing Soviet helicopters and the last days of the big Soviet Cold War arsenal.

I seem to recall the American response to the Soviet invasion of Afghanistan was to boycott the Olympics.

While The Photographer. doesn't necessarily add a great deal of information about the full nature of the conflict it does manage to put human faces on a small moment in the history of a part of the world still very much in our headlines. It's the sort of book that has to potential to open young minds and make them want to learn more about Afghanistan, about photojournalism, about Doctors Without Borders, and maybe why this part of the world continues to capture our attention.

Mentioned in this review

The Photographer: Into War-Torn Afghanistan with Doctors Without Borders
by Didier Lefèvre
illustrated by Emannuel Guibert
First Second Books 2009

The Journey Is The Destination: The Journals of Dan Eldon
edited by Kathy Eldon
Chronicle Books 1997

The Adventures of Tintin books
by Herge


This review is being cross-posted at Guys Lit Wire today.
Posted by david elzey at 5:10 AM